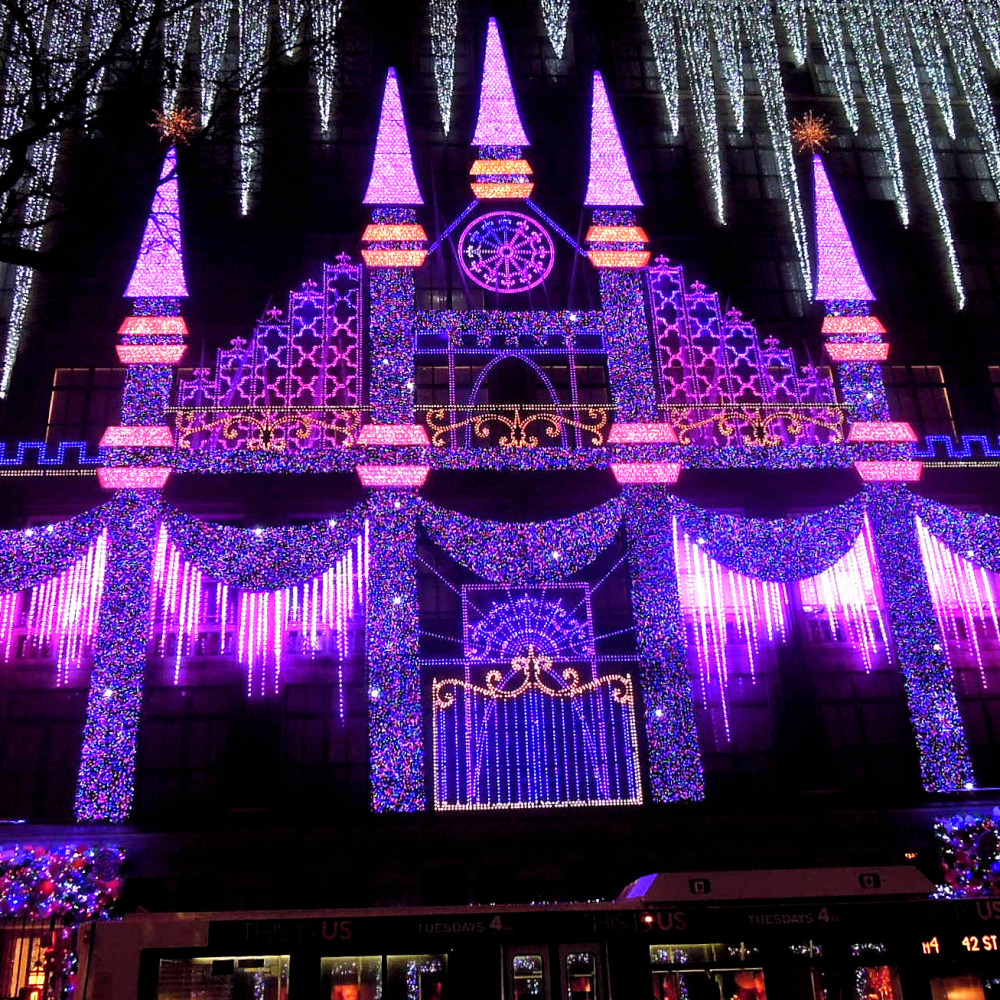 Hello everyone! First I want to wish happy Thanksgiving to those who celebrates today. I hope you’re having a great time with your families.

Maybe some of you have noticed that I have two language versions on my blog.

Usually I double my content on both versions. But there is one post category, that I only post in Russian version. It’s called City Walks and I post there photos of NYC with some commentaries, of how a recent immigrant to this country (me) sees the city. This all started after I made a “day in a life” post, where I showed how I spent one my day, going to movie and then some shopping. My readers asked me to make more posts like this so I started making them from time to time. It all happened several years ago in my old blogspot blog. The audience of it back then were mostly Russian-speaking people who lived in ex-USSR countries. Only few of them ever been to NYC or planned to be one day and the interest to such content was natural.

When I moved to self-hosted blog I decided to leave this category in Russian version only as these posts are messages, if you will, to people of my culture.

By the way, I also have another category only in Russian version of my blog – Behind The White Fence. If City Walks are posts packed with photos and a little bit of text, Behind The Picket Fence are loooong posts, where I’m describing different aspects of life in America, traditions etc.

But there is one type of City Walks posts, that I think can be interesting for not only Russian-speaking audience. Every year I’m making holiday series of City Walks, where I’m showing holiday windows of NYC stores. There are several of them that every year make miracle, and it’s always a must see for me. So I decided this year to bring these posts for all my blog audience.

If you’re interested, you can see my other City Walks posts here.

Also a couple years ago I also started adding videos to my photo posts. I have all of them on my YouTube channel playlist Christmas In New York.

I like starting this series from the center point of holiday NYC – Rockefeller Center area. Saks Fifth Avenue light show is the most exciting thing you see there (another exciting thing is the Christmas Tree of course, but it’s not lit up yet). 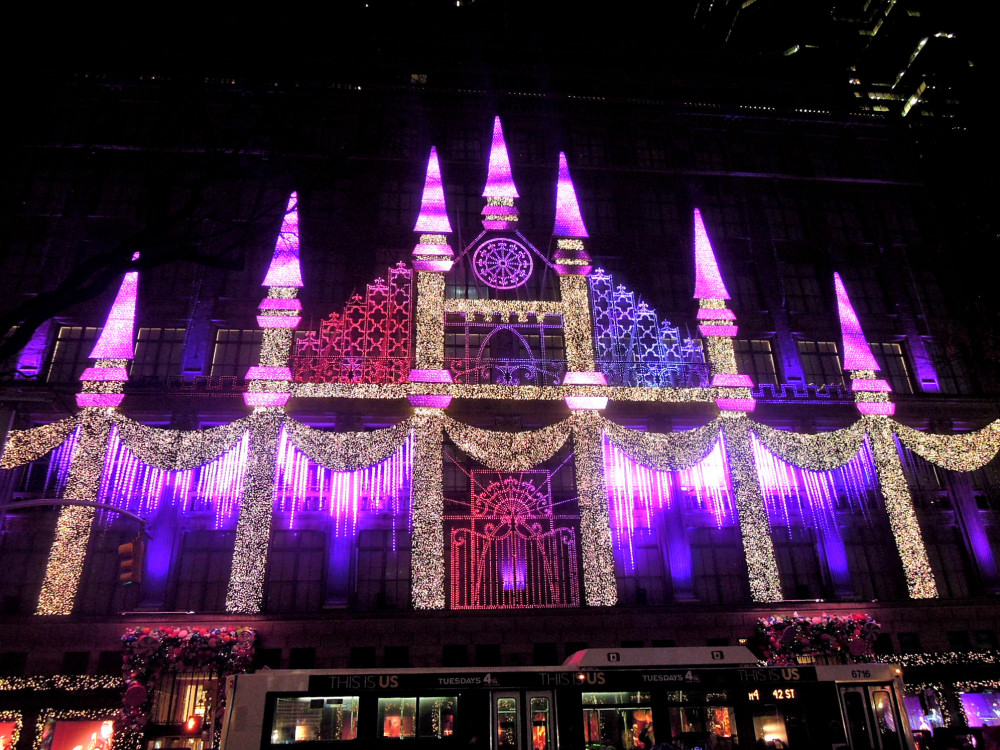 I’m only been living in NYC for 6 years, so cannot tell for years before. But every year that I seen Saks always has the same music of its show. The show can differ from year to year (sometimes they can have similar one a couple years in a row). But the music is the same – Carol of Bells. This is my favorite Christmas song ever! Not only it’s amazing and makes me shiver every time I hear it. 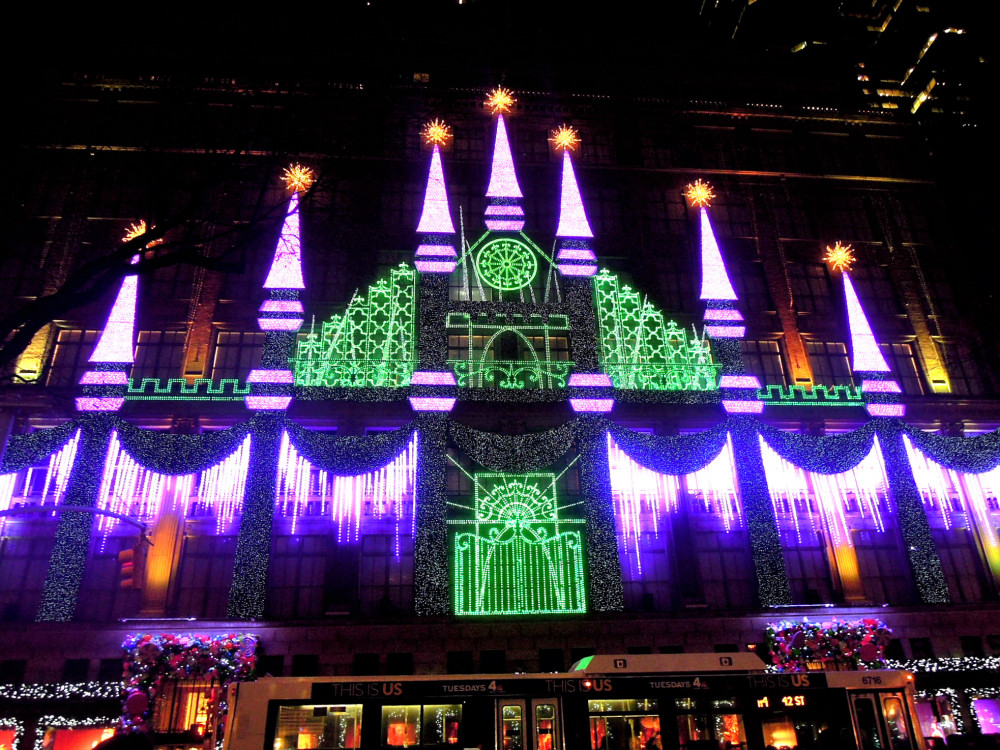 I love it especially because the music was written by Ukrainian composer Mykola Leontovych. Who in turn wrote it inspired by Ukrainian folk song – “Shchedryk”. I remember when I was a child we were singing this song on Old New Year eve (it’s New Year’s Eve in the Julian Calendar) walking from house to house and wishing health, wealth and rich harvest for the year coming.

Ok, I already rambled too much. Below is the video of Saks Light Show, hope you will enjoy watching it. I should apologize for not perfect sound, you can guess that there are ALWAYS crowds of people, as well as street vendors, driving along cars and buses. I cannot get rid of these sounds 😉

I plan to post several City Walks posts in coming couple of weeks. Hope you won’t mind seeing not craft content on this blog 🙂