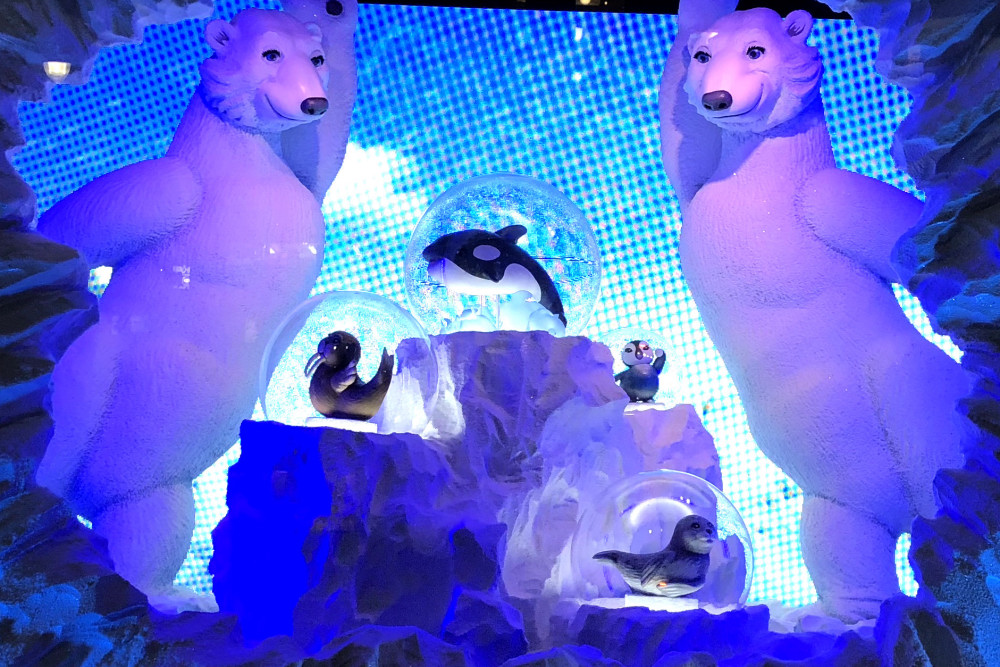 Before I start this post I want to send you all belated Christmas Wishes! Hope you had the greatest time with you families and significant ones. I spent value time with my family relaxing and enjoying the holiday. Which is the main reason why my blogging activity slowed down.

As you may guess from the title of this post it will be different from my usual craft posts. After many hesitations (which I explain below) I decided to make them this year, even though it’s already kind of late for these series.

But first let’s me make a little introduction. So those of you who relatively new to my blog and have no idea what the heck City Walks are.

Back when I had my blog on blogspot and when it was written mostly in Russian I ran City Walks category where I was sharing photos of different parts of New York with my side notes. It was early Instagram time when we didn’t have stories, geo tags etc. and Instagram itself was different.

At the time these posts were quite popular among my followers, who mostly lived in ex-USSR countries and never had been to NYC or USA.

When I moved to self-hosted blog I continued making these posts, only keeping them in Russian version (I thought that people from US won’t be interested in this content).

By the way, the fun fact, when I was thinking of a new name for my blog (previously it had the most boring and faceless name ever – My Hobbyland) – that’s where it came from. I could not decide how to name a blog with mostly craft content where I also occasionally post completely non-crafting one. So I decided to leave Walks with preceding Craft. It made sense for me then (and also I couldn’t think of something better) and it’s just left as my “brand” name.

Anyways. With time it became harder for me to keep up with these posts and by that time Instagram and Facebook were totally killing “regular” blogs. As well as many people simply moved there.

So I kind of put this category of my blog on hold. And now City Walks can only be seen during holiday times when I share a bit of Christmas New York. Mostly iconic department stores windows and some bits and pieces of something else.

I apologize to those of you who aren’t interested in such posts and come to my blog for craft projects. Please-please, bare with me! It will be only several posts and I only do it once a year. You can totally skip them, I hope I won’t spam your inbox too much.

For those who do like and maybe even wait for these posts… With all being said above this year I almost skipped these series and seriously was thinking if I want to continue them in future.

The main reason is time. Holiday season is very busy and it feels like every year it becomes even busier. Back when I started making these posts I wasn’t part of any design team hence I didn’t have any commitments and can assign my free time whatever I want. So if I didn’t have much time I wouldn’t make another card or blog post, but dedicate it for City Walks.

But since then I got much more into card making and craft blogging, social media started taking away much more time and it became much harder to keep up with these posts, which usually are quite time consuming.

This year I totally got out of my holiday schedule and had to decide what I should skip and what to keep. Holiday City Walks posts where under serious consideration to skip.

If not I’d started them at the beginning of December. I didn’t find time to deliver these posts before Christmas and after it didn’t make much sense. I believe some of you already removed your holiday decorations and move on with your life 😉

But today morning I decided to push through and make them. Maybe just a bit lighter version than usual. Or I should rather day – a very light version lol. I thought if I won’t make it this year -most likely I won’t make them in future. But I really want to continue making these posts. They bring me so much joy at the end of the day. And yes, it’s maybe a bit late for Christmas content on one hand. On the other hand there is still 12 Days Of Christmas go on. For me personally winter holidays are in their very middle. My family celebrate New Year as big as Americans celebrate Christmas (as almost all people from ex-USSR countries are, this is a long story why). And we’re Orthodox Christians and celebrate Christmas on January 7th. So basically we have two Christmases 🙂

Another side note – some bits of the city I only post to Instagram and don’t duplicate here. If there are only a couple of photos and some short text – it feels like to much to blog it. So some small pieces you can find on my Instagram.

Whoa! That was a long introduction! 😉 Lets fun begin!

In this post I want to show Lord & Taylor and Bloomingdales windows.

Each year this store windows are probably my favorite. Well, I usually have several favorites, in different categories so to speak. Every year Lord & Taylor wins “The most kind and cozy” category. And the music they play is so peaceful and calm. I have a video below where you can listen to this music (mixed with noises of the city of course).

This year it was the 80th anniversary of their holiday windows (can you believe it?) and they were made in collaboration with Hallmark Channel. 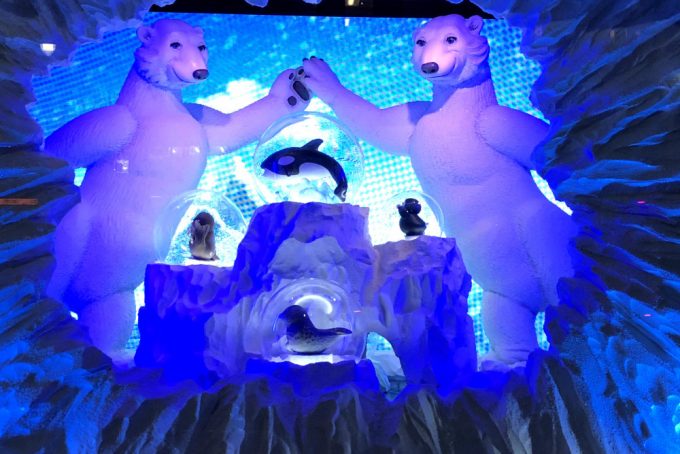 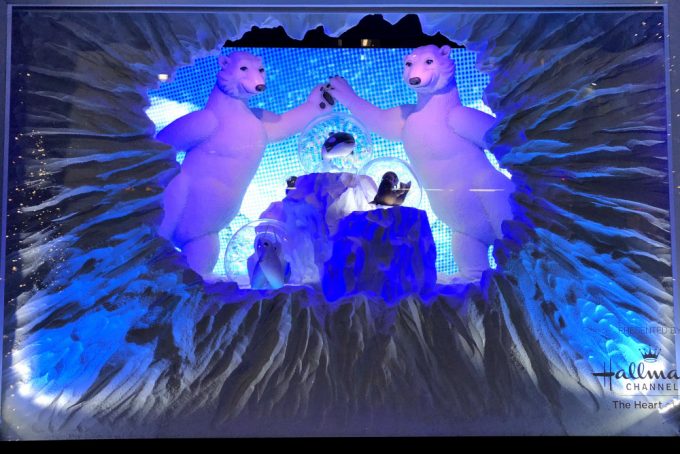 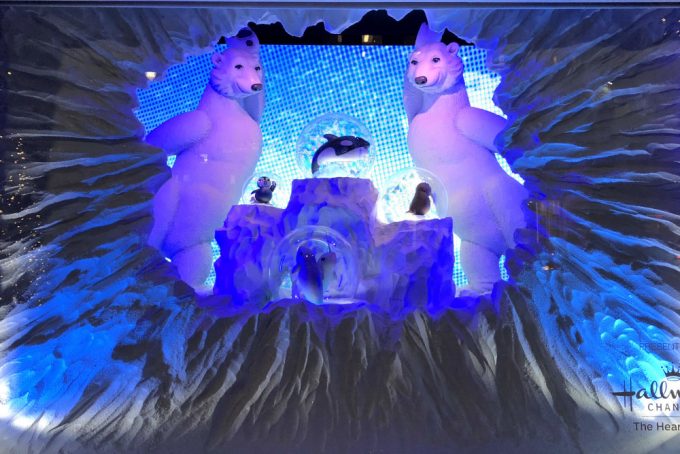 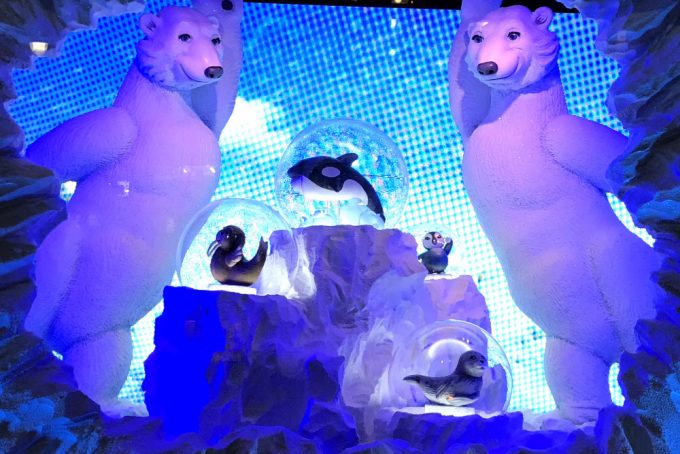 Santa’s Magic: A modern-day Santa looks into his globe 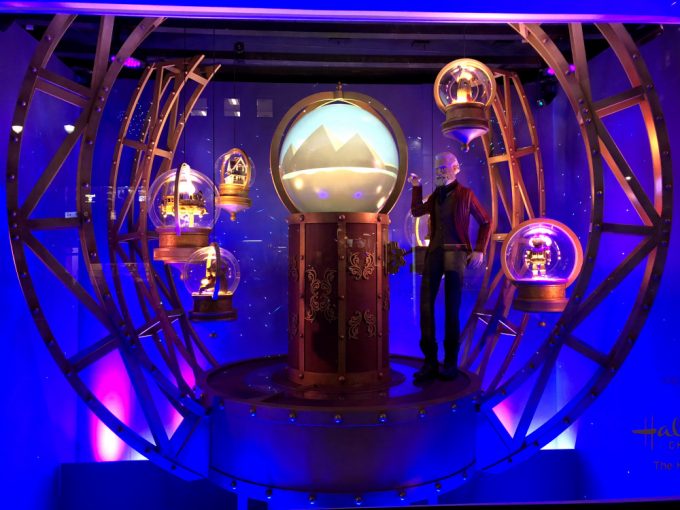 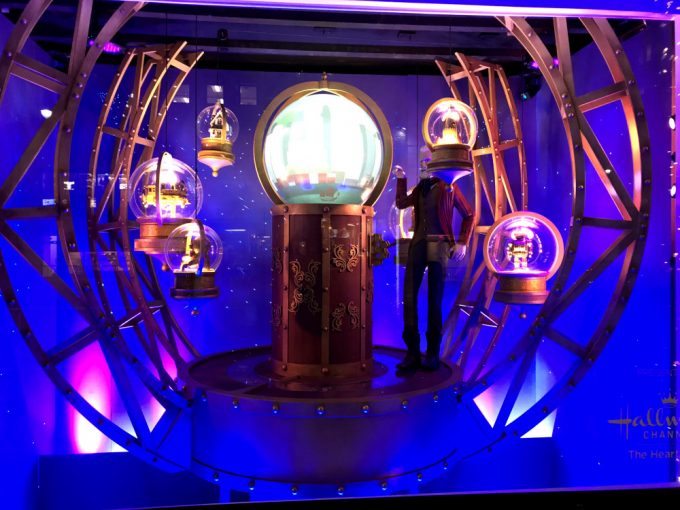 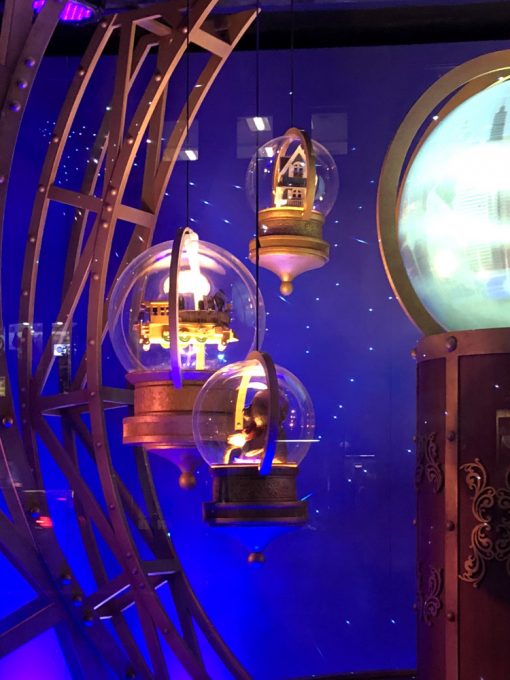 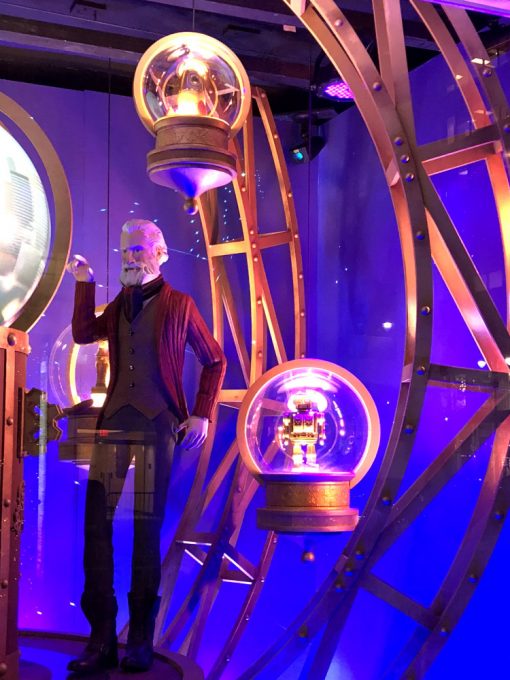 Holiday Circus: A vintage-style circus is conducted by the master of ceremonies 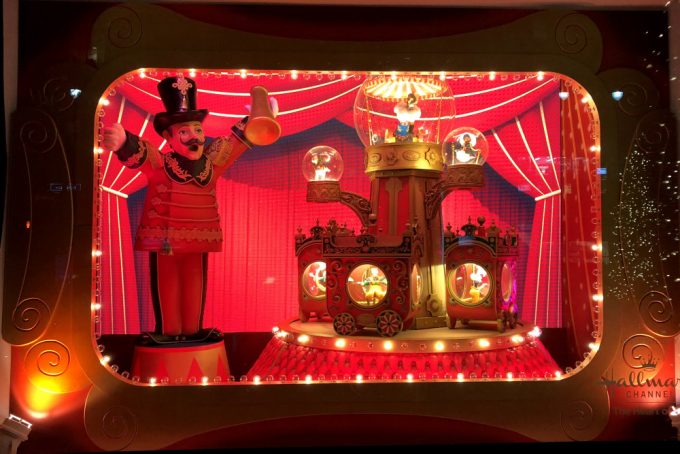 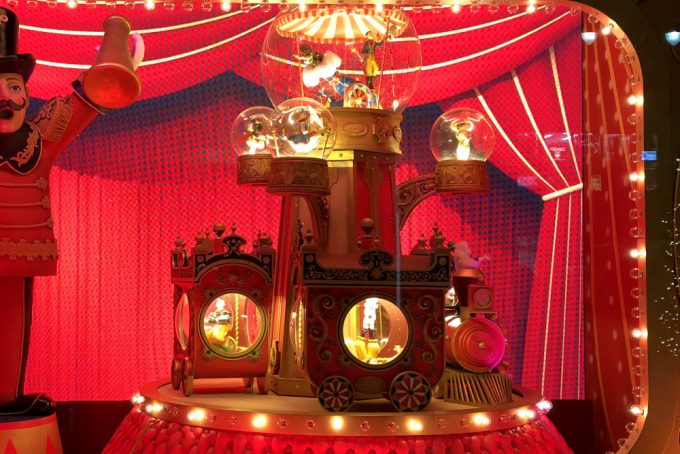 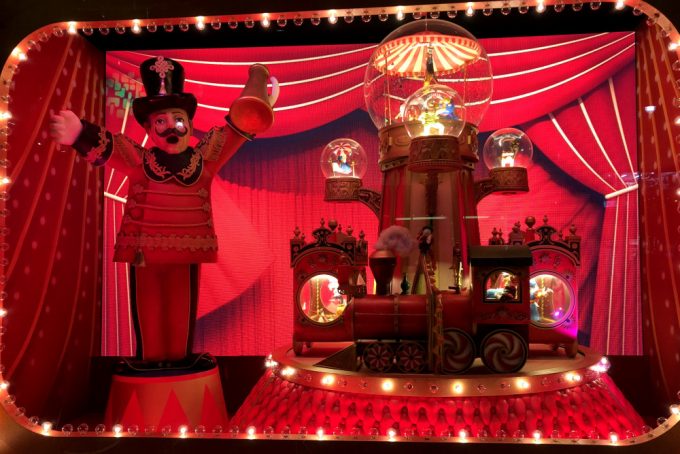 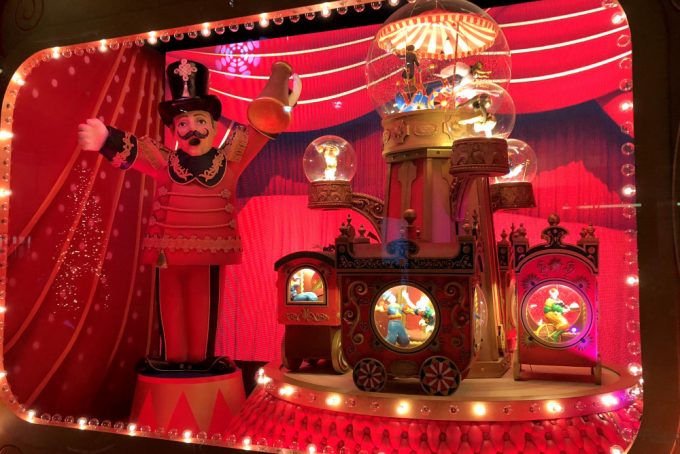 Winter Woodlands: A rabbit ventures toward a magical tree with woodland creatures 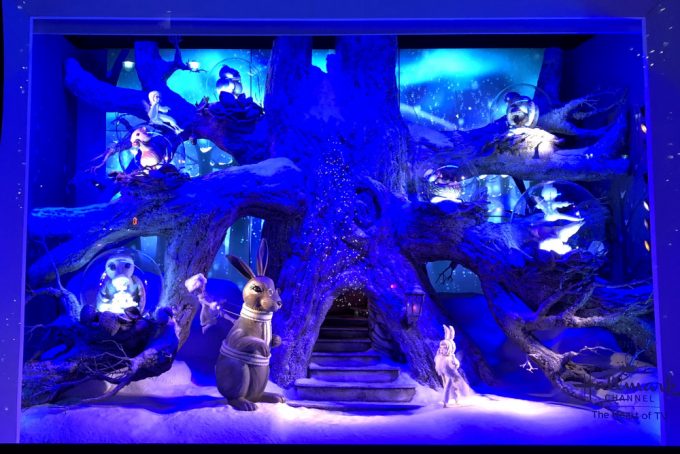 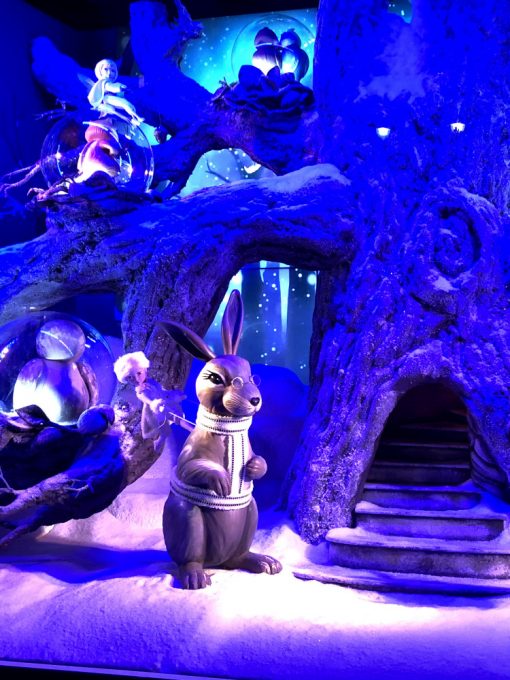 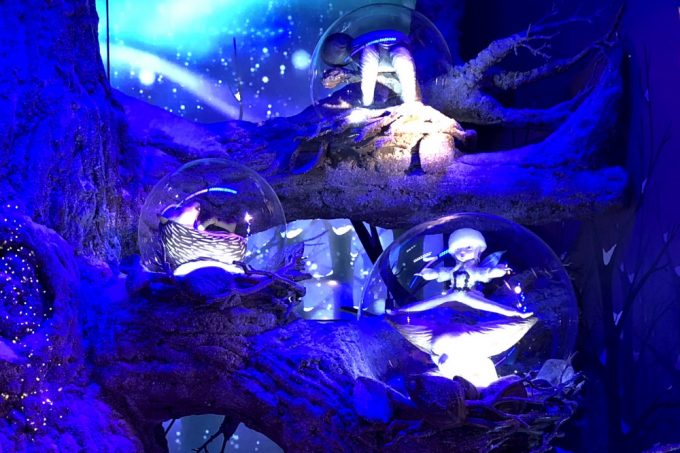 This year holiday windows theme at Bloomingdales was “Greatest Holiday Windows,” produced in partnership with Swarovski and bringing the scenes and music from The Greatest Showman movie about  P.T. Barnum and his circus as well as his quotes to life. The topic (of the new musical movie and these windows) can be controversial, keep this in mind. I personally cannot say, that I have a strong position about it.

You can read more details about these windows here. I’m using some language from this resource to accompany my photos (I made this text in Italic). 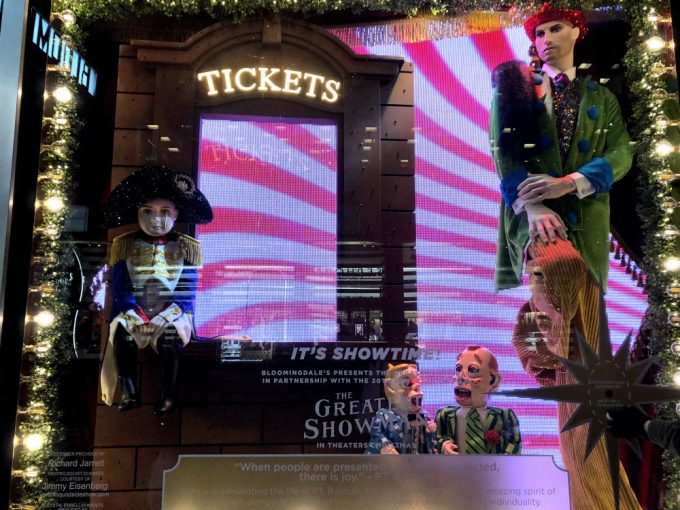 “When people are presented with the unexpected, there is joy”

The first window opens the show by drawing inspiration from The Greatest Showman’s song “From Now On”. The world’s tallest and smallest men, in Swarovski crystal-adorned hats, join forces to work the ticket booth for “The Greatest Windows on Lexington Avenue”. Behind them, a video wall morphs from circus tent stripes to peppermint inspired optical illusions. Visitors are invited to step right up and become part of the show as they push a button and watch in amazement as their faces magically appear on screen inside the window. 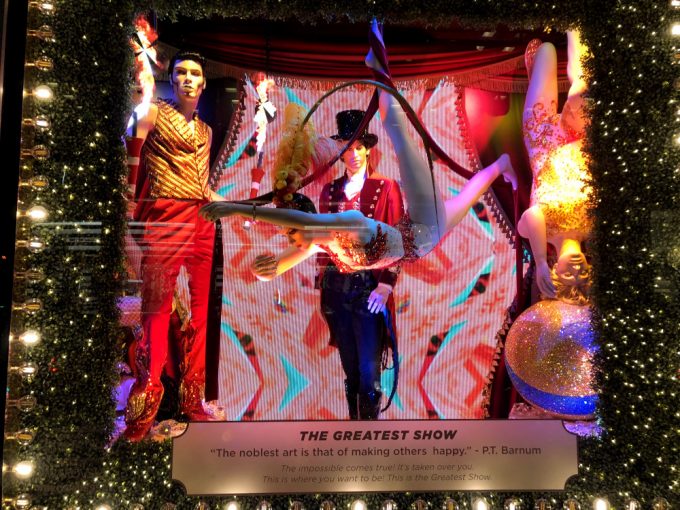 “The Noblest art is that of making others happy”

The opening song of the movie, “The Greatest Show” provides the inspiration for the next window which features visionary showman P.T. Barnum in the circus ring introducing the oddities. 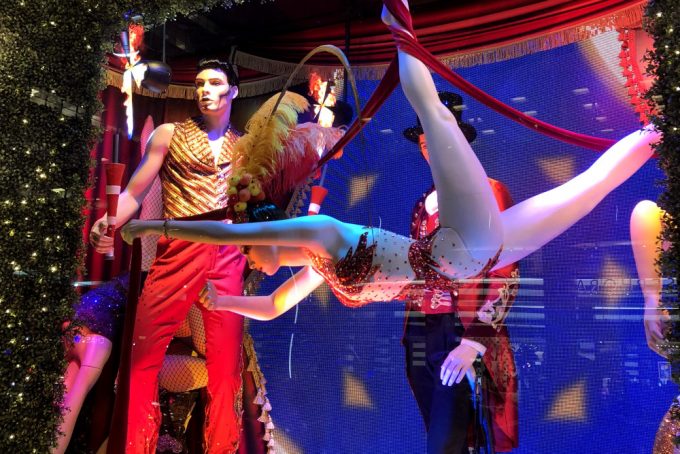 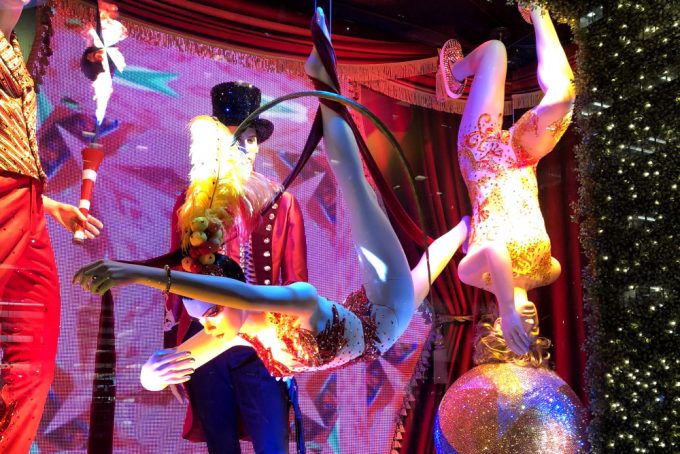 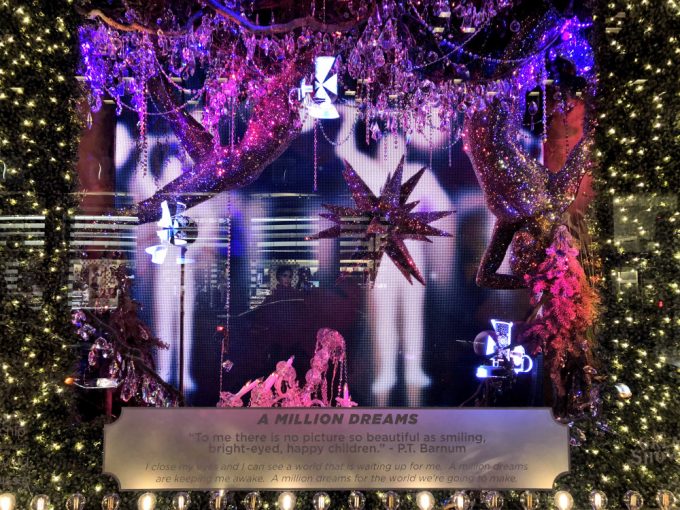 “To me there is no picture so beautiful and smiling, bright-eyed, happy children”

Next, onlookers are taken inside P.T. Barnum’s vivid imagination as a boy with the song “A Million Dreams”. A forest of trees growing out of a run-down mansion is decorated in garlands made of Swarovski crystals. Two mannequins completely covered in Swarovski crystals represent floating shadows of circus performers. The video back wall represents Barnum’s vivid imagination, displaying more shadows of circus performers. 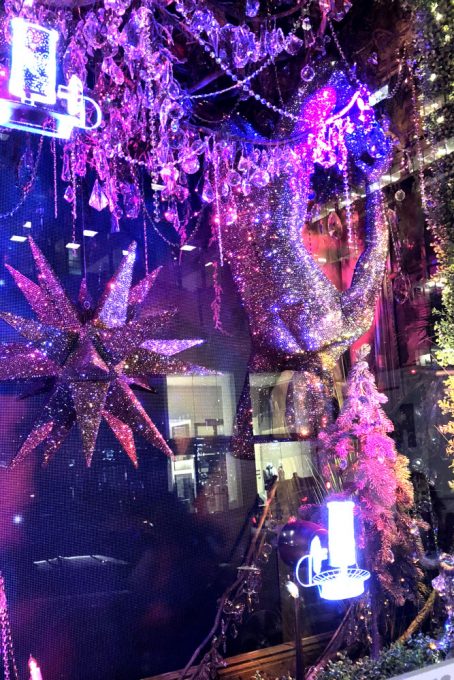 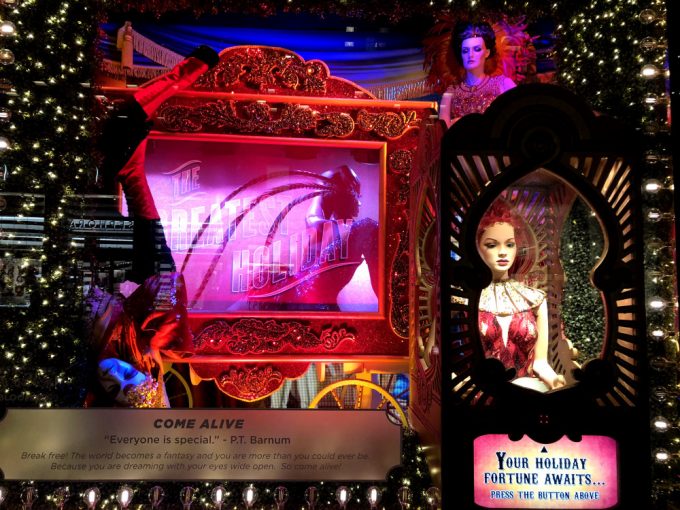 This window, inspired by the song, “Come Alive” represents the scene inside the American Museum. A larger than life carriage covered in Swarovski crystals is the focal point of this window. The snake charmer, strong man and tattooed lady also make an appearance in the scene while vintage circus posters are displayed in the background. Again, onlookers can join in on the fun by interacting with the Oracle to reveal their fortune. 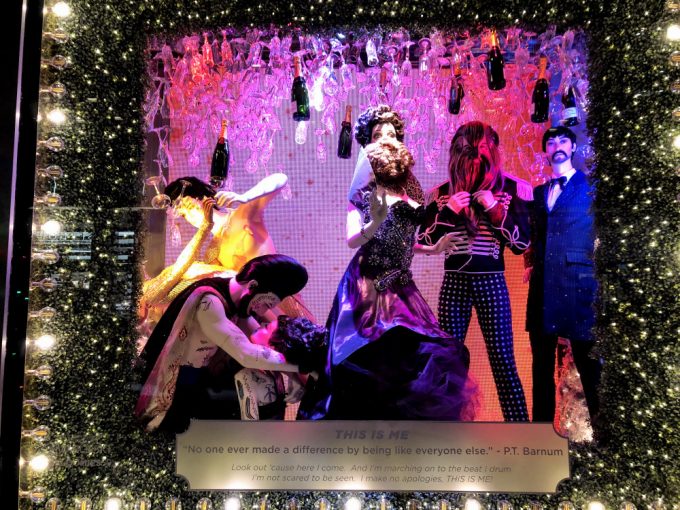 “No one ever made a difference by being like everyone else”

“This is Me” is a celebration of the oddities coming together as a family despite their differences. The Bearded Lady is the star of the window surrounded by Swarovski crystal-encrusted oddities. A rotating spotlight focuses on each oddity giving them their moment to shine. Holiday trees covered in champagne glasses set the celebratory scene. 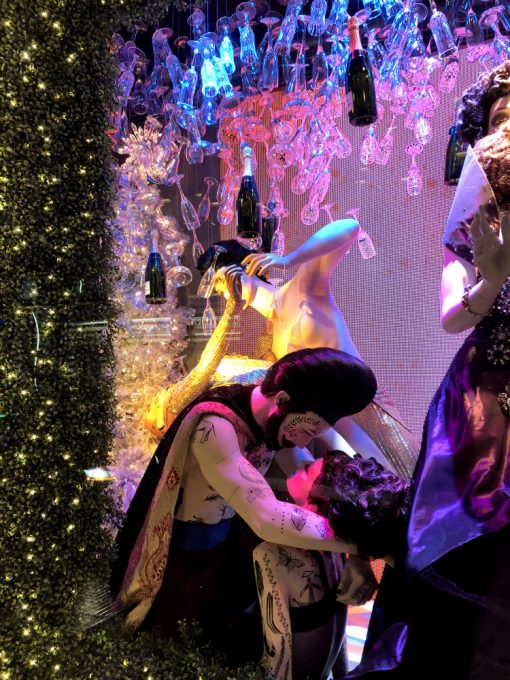 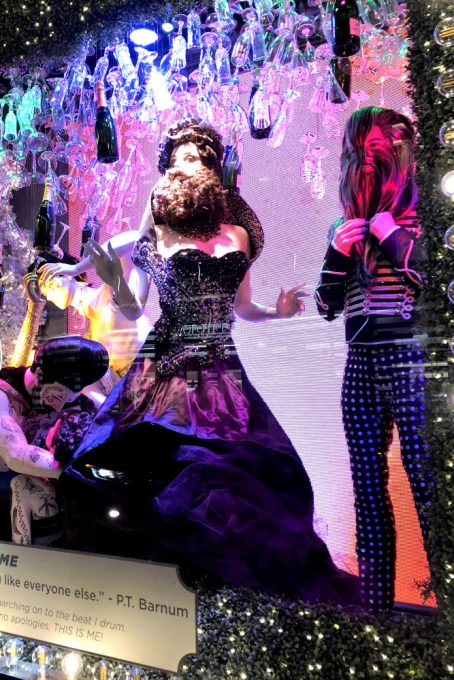 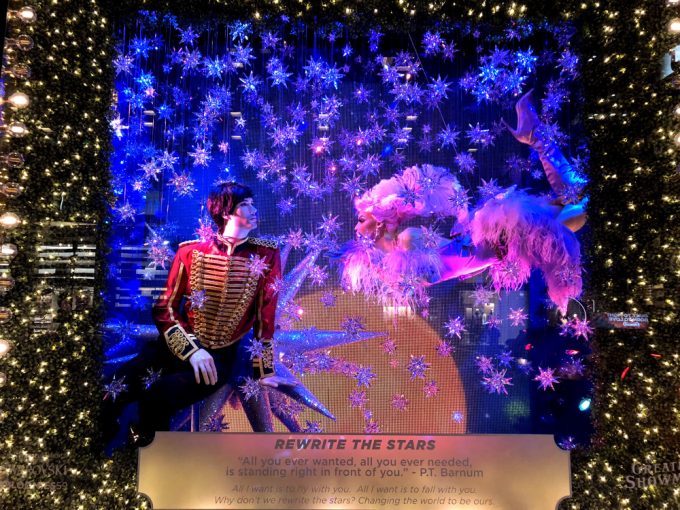 “All you ever wanted, all you ever needed, is standing right in front of you”

The magical window journey ends with a heartwarming scene inside the big top where Anne Wheeler and Phillip Carlyle fall in love. 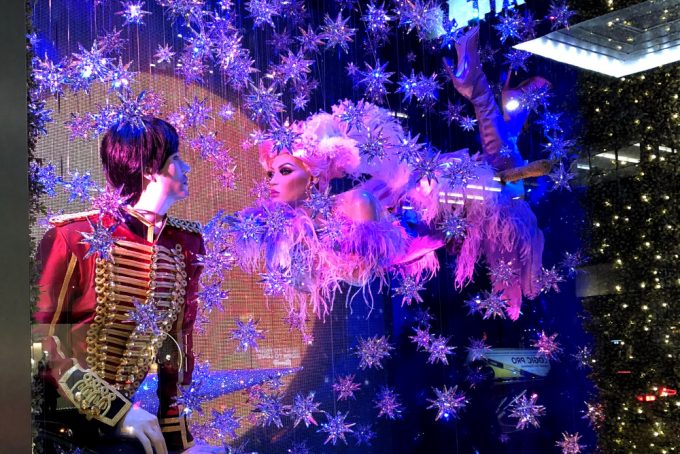 If you’re reading this – that’s mean that you came to the end of this long-long post and I’m very pleased to see you here. Hope you liked this post and tomorrow I’ll bring the second part holiday New York.