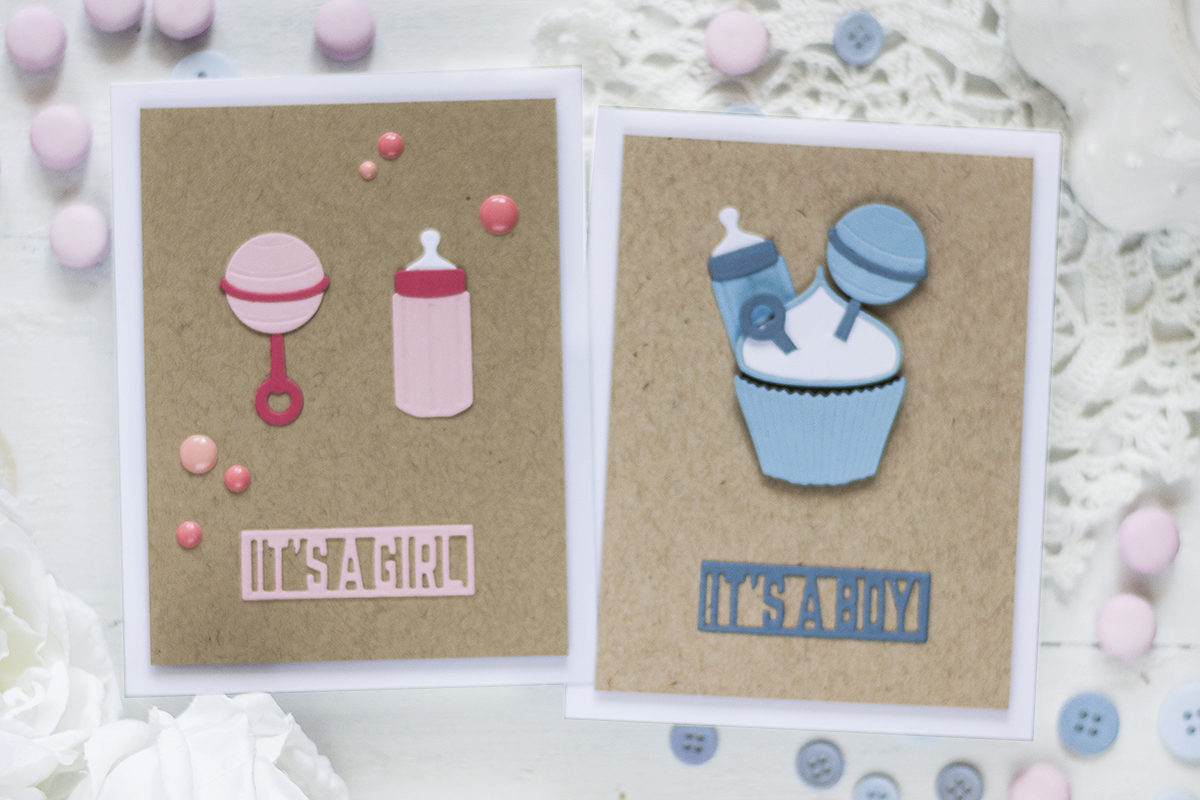 It’s been a while since I posted the last time. My whole family was sick for almost 4 weeks. We don’t know if it was THAT as testing in NYC was very limited at that time (but most likely it was). Even though it was pretty hard when we all were down it didn’t go to the state when we would need to call ER. Which at that time in NYC was almost impossible and even if you got to a hospital it basically meant you would never come back. I cannot stop thanking God that our symptoms were relatively mild.

While many people now use this extra time to tackle all kind of projects I’m very behind of everything lol. I’m taking baby steps of coming back to normal life and things that I usually do day by day. Of course cardmaking is one of them.

Today I want to share a couple of simple new baby shower cards made with this month’s Spellbinders Large Die Of The Month – Happy Celebrations. 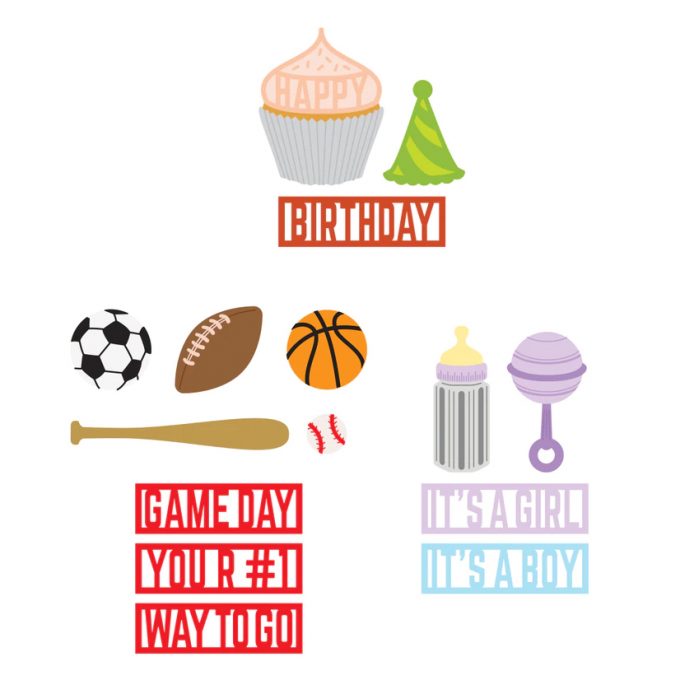 The dies from this set can be used to create stand-alone projects of different themes and also the set coordinates perfectly with the Past Large Die Club favorite “Truckin Through the Seasons – Large Die of the Month Club“.

I made both cards in the same style – light colors on a kraft background, clean and simple style, no stamping – just die-cutting. 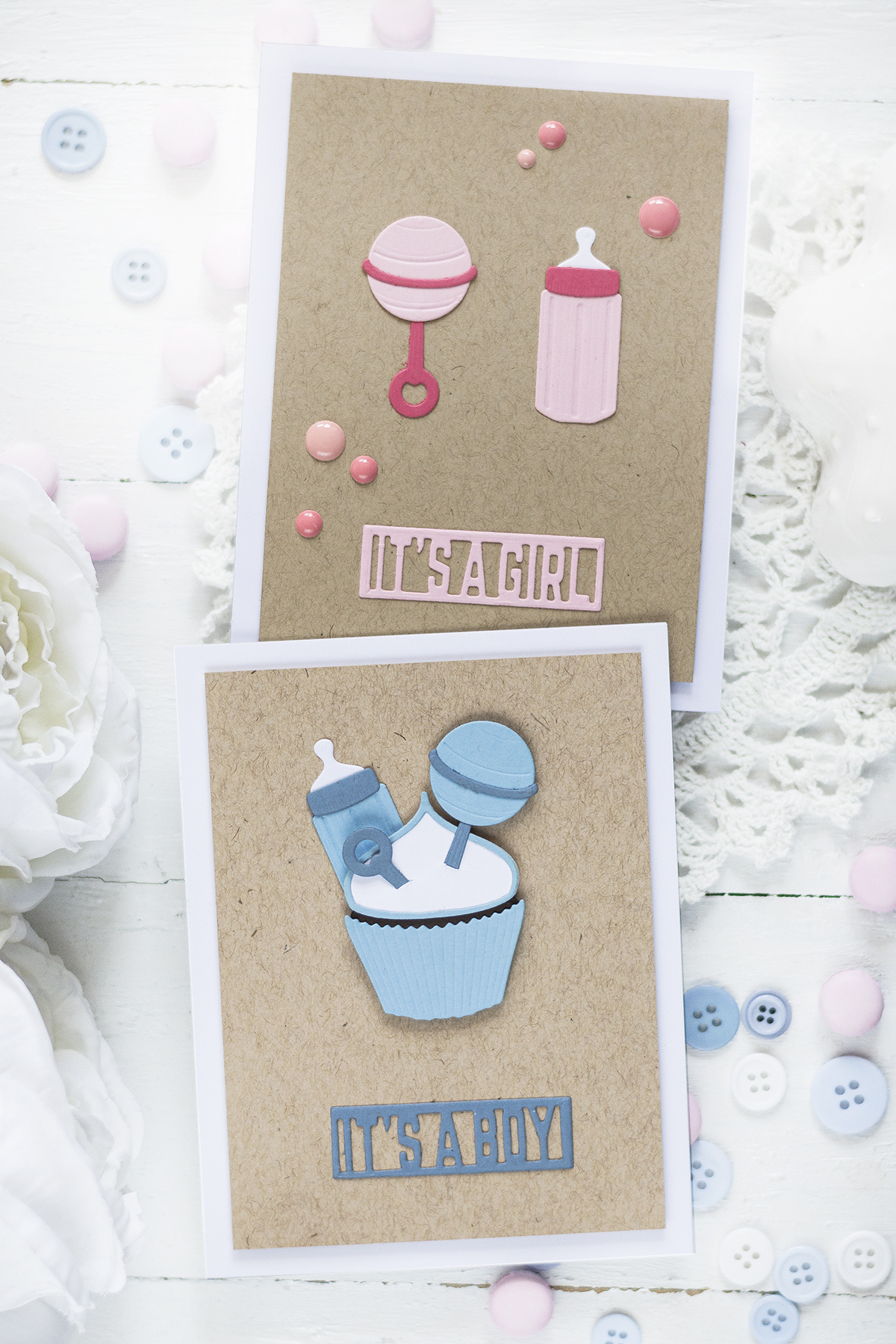 For It’s a Boy cards I made a simple cupcake that would be served at a baby boy shower. First I die-cut elements for a cupcake using blue, white and brown cardstock. After that I assembled the cupcake by gluing all elements together. I also made two slits in the “frosting” part of the cupcake using my craft knife. 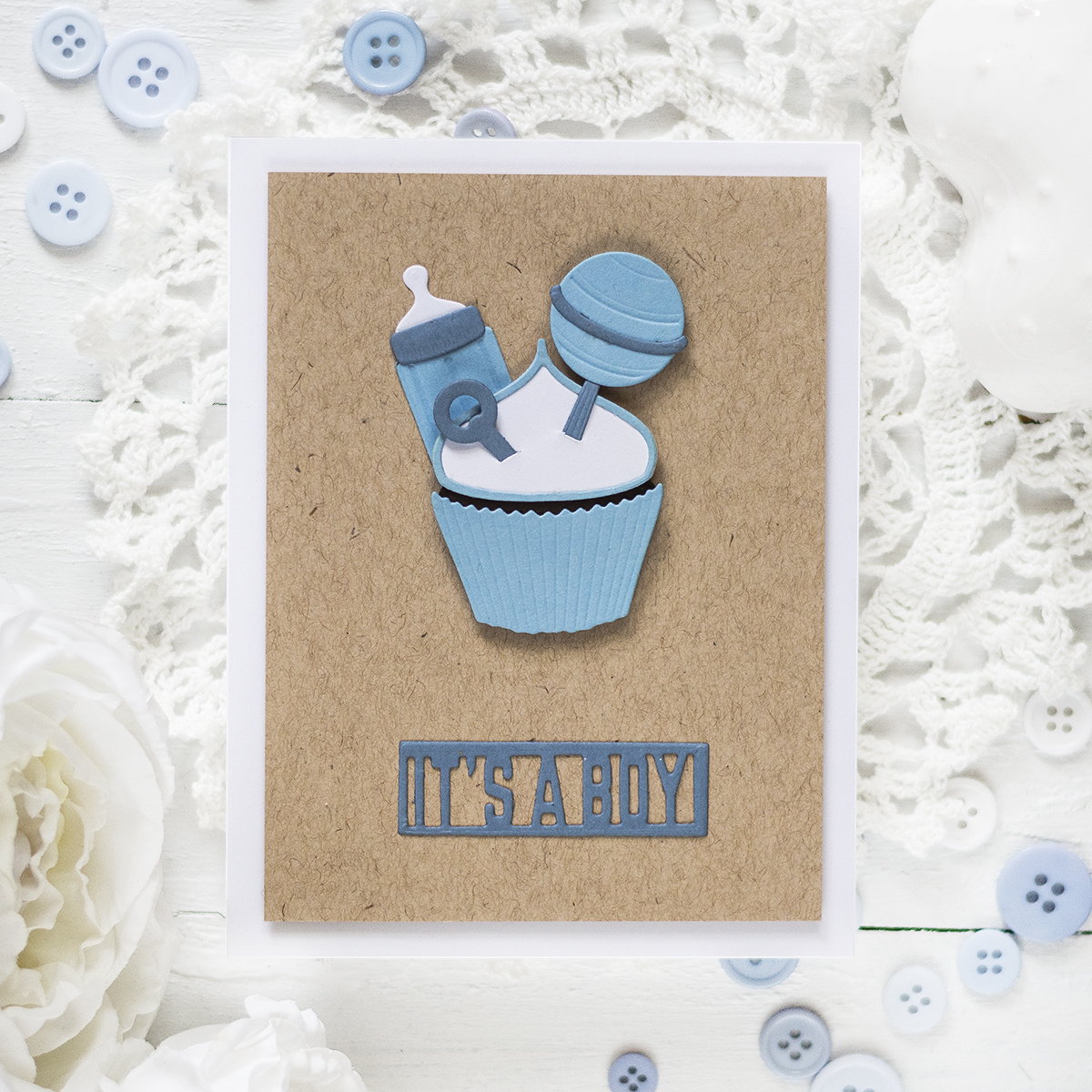 Next I die-cut elements for a rattle out of two pieces of blue cardstock of different shades as well as an additional rattle handle. Then I pushed the handles through the cupcake frosting slits and adhered them to the back side of it. After that I adhered a rattle “head” to one of the handles.

After that I die-cut elements for the baby bottle and them adhered them to assemble the bottle. I also die-cut a sentiment out of a blue cardstock. 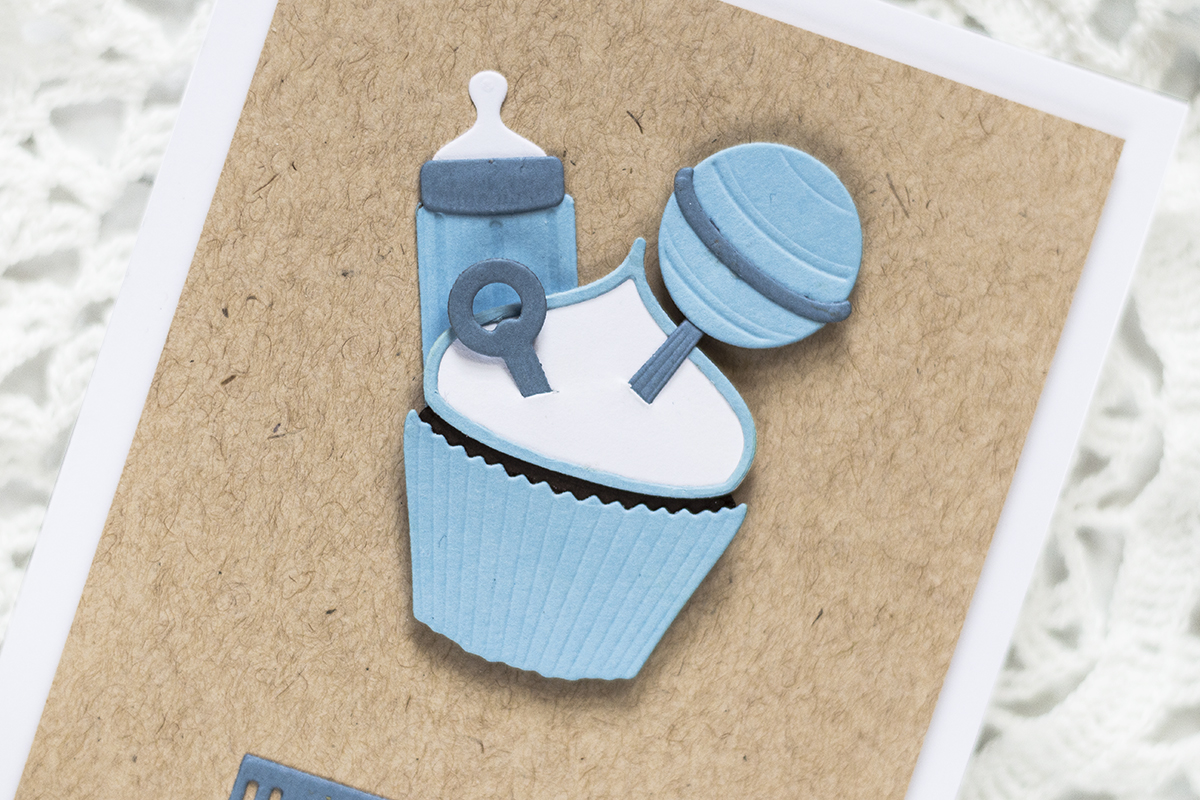 To assemble the card I foam mounted a kraft panel onto a white card base, adhered a bottle and a sentiment flat and popped up the cupcake.

Initially I wanted to make the girl card with the same design but in pink colors. But then I decided to change the design, making it even simpler. 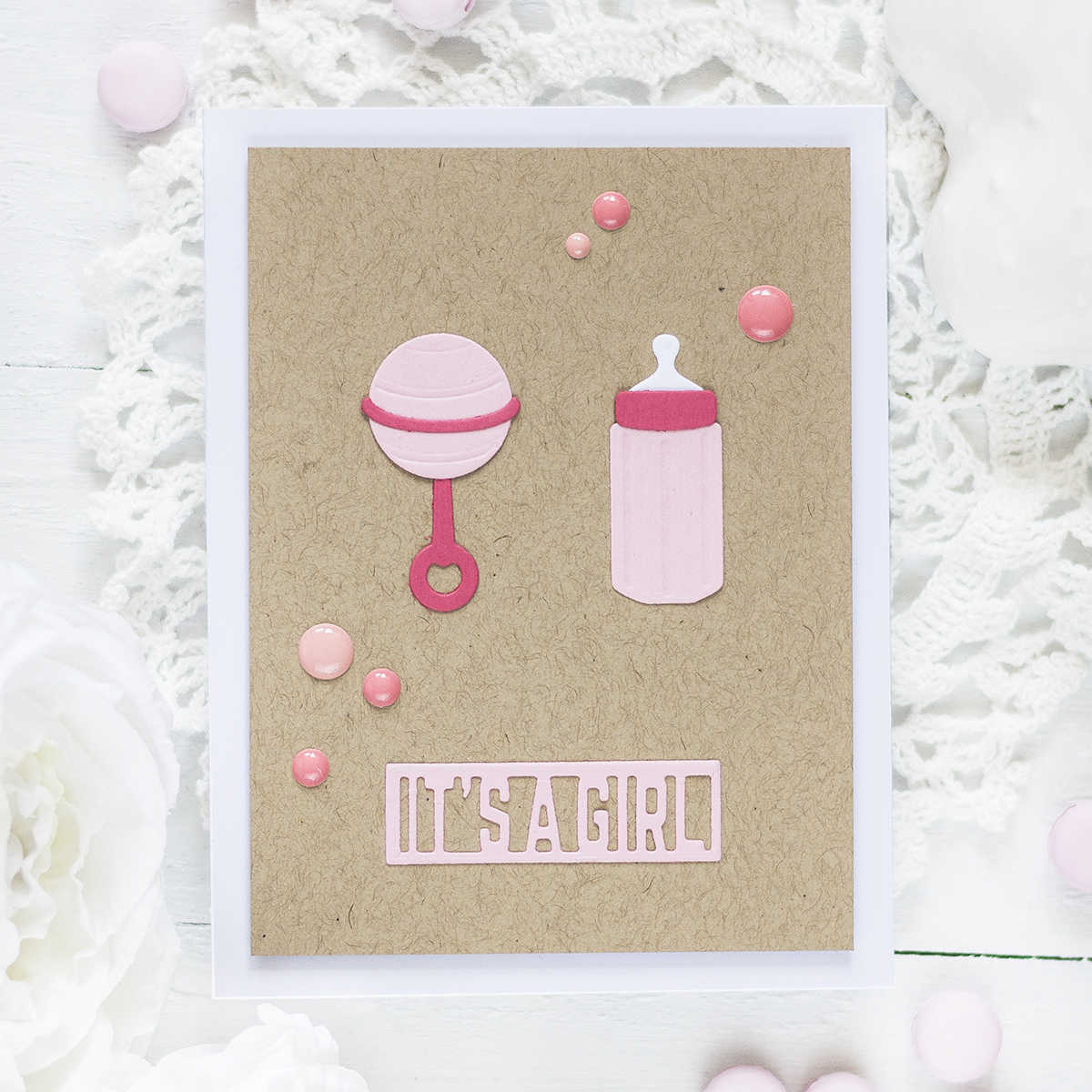 So I die-cut elements for a rattle and bottle out of twp pieces of pink cardstock of different shades and adhered them together to assemble the objects.

Then I adhered them onto a kraft card base. Along with the sentiment which was die-cut out of a pink cardstock. 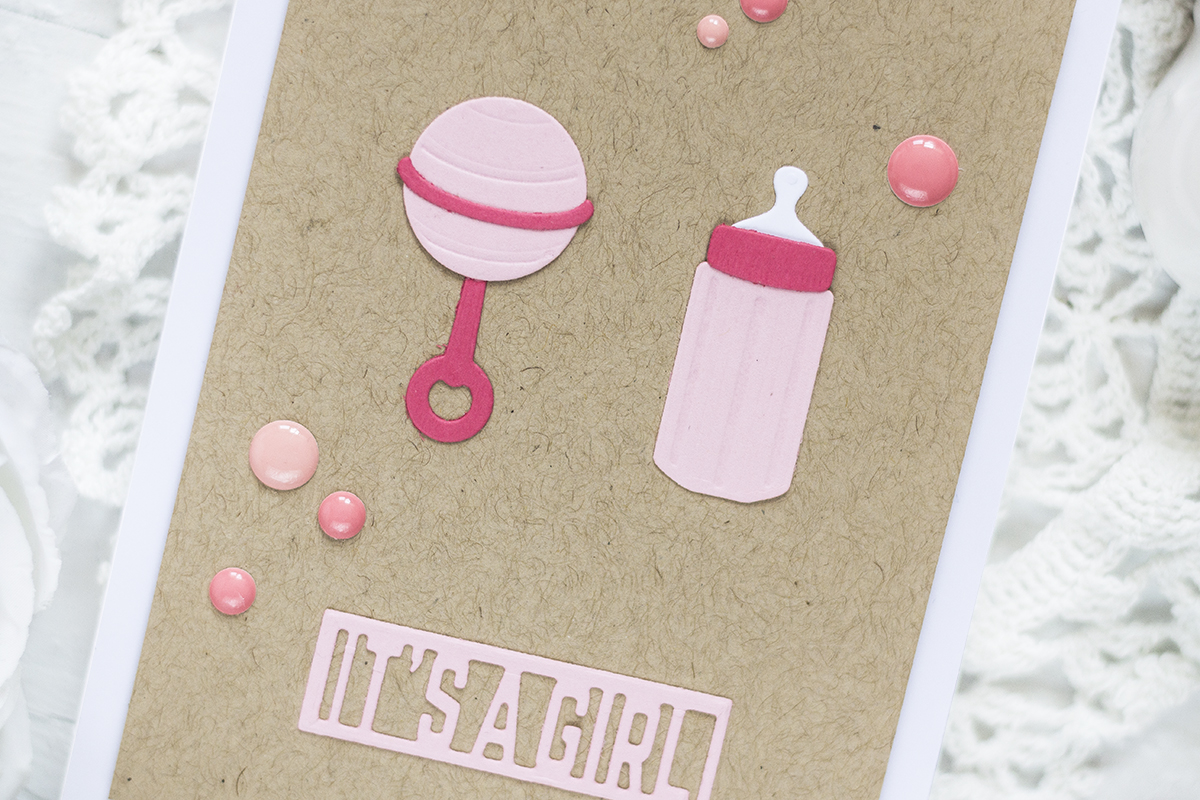 Lastly I foam mounted the panel onto a white card base and added several pink enamel dots to accentuate the card.

If you’re interested in joining to the Large Die Kit you can do it here. Spellbinders also have 5 more subscription clubs which you can check out here. There are several Value Club options available for those who would like to join multiple clubs at once.