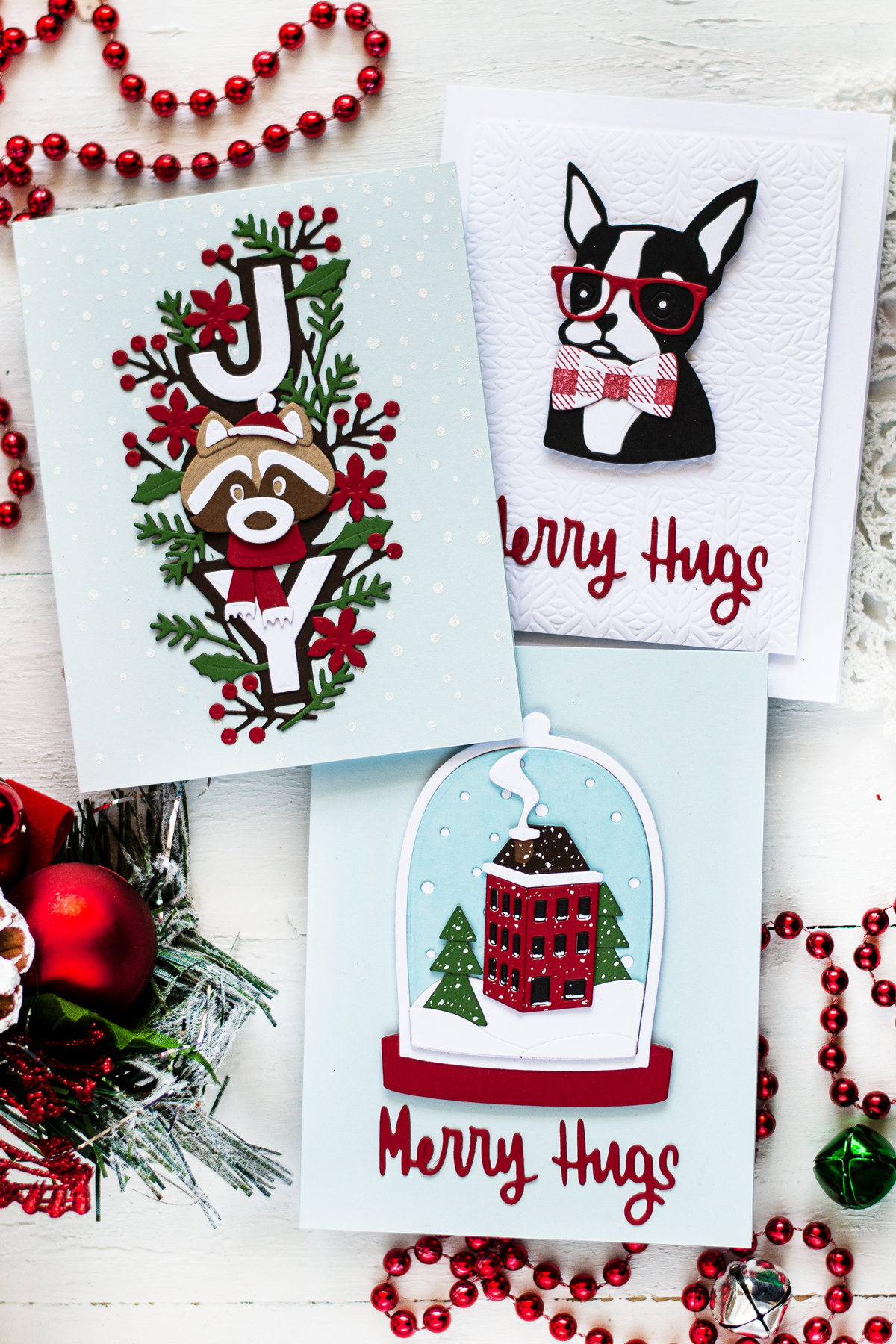 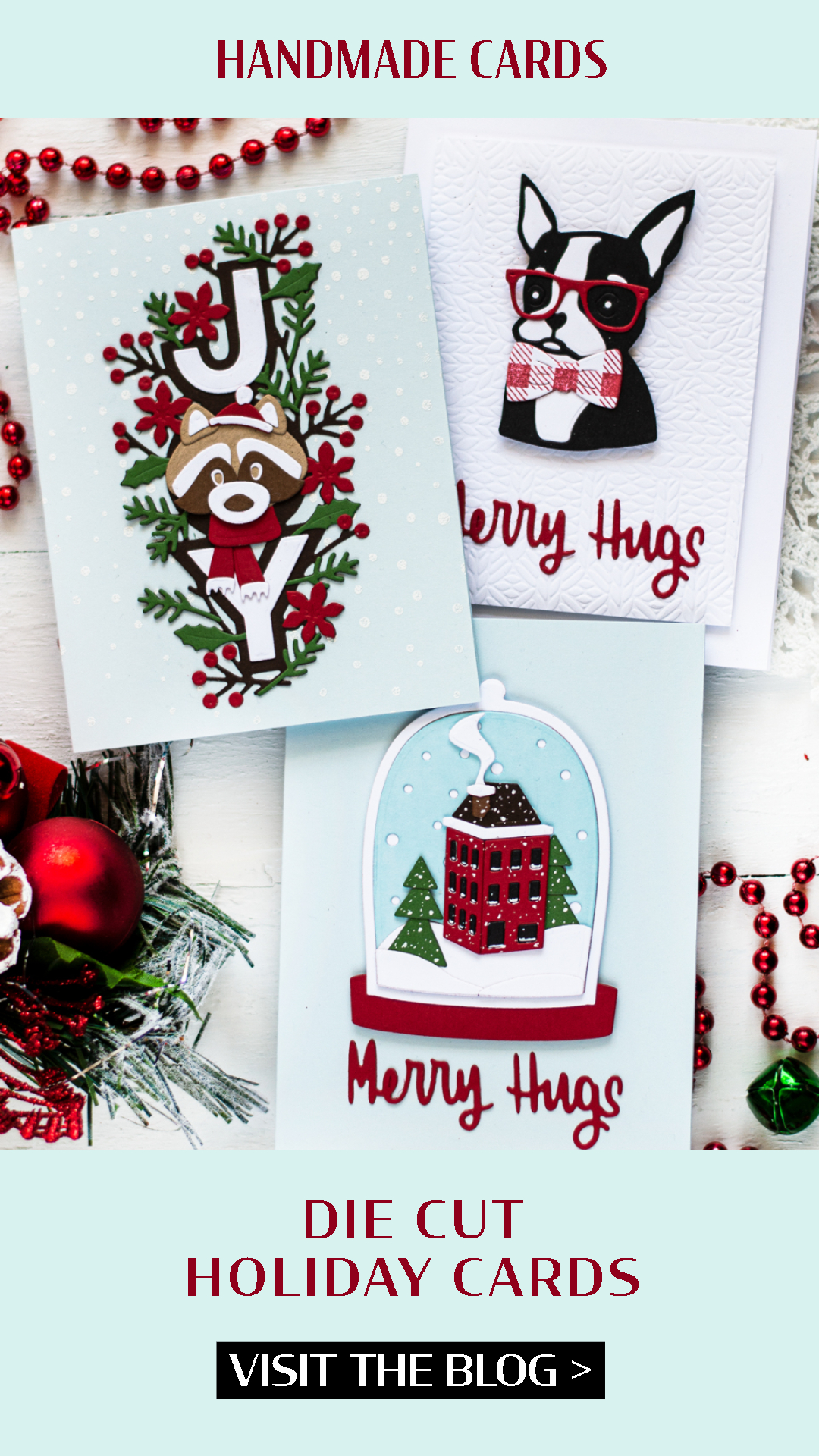 For my first card I used two die sets – Christmas Bandit and Joy. The raccoon head from the Christmas Bandit Die Set fits perfectly the space for letter O in the JOY word of the Joy Die Set. 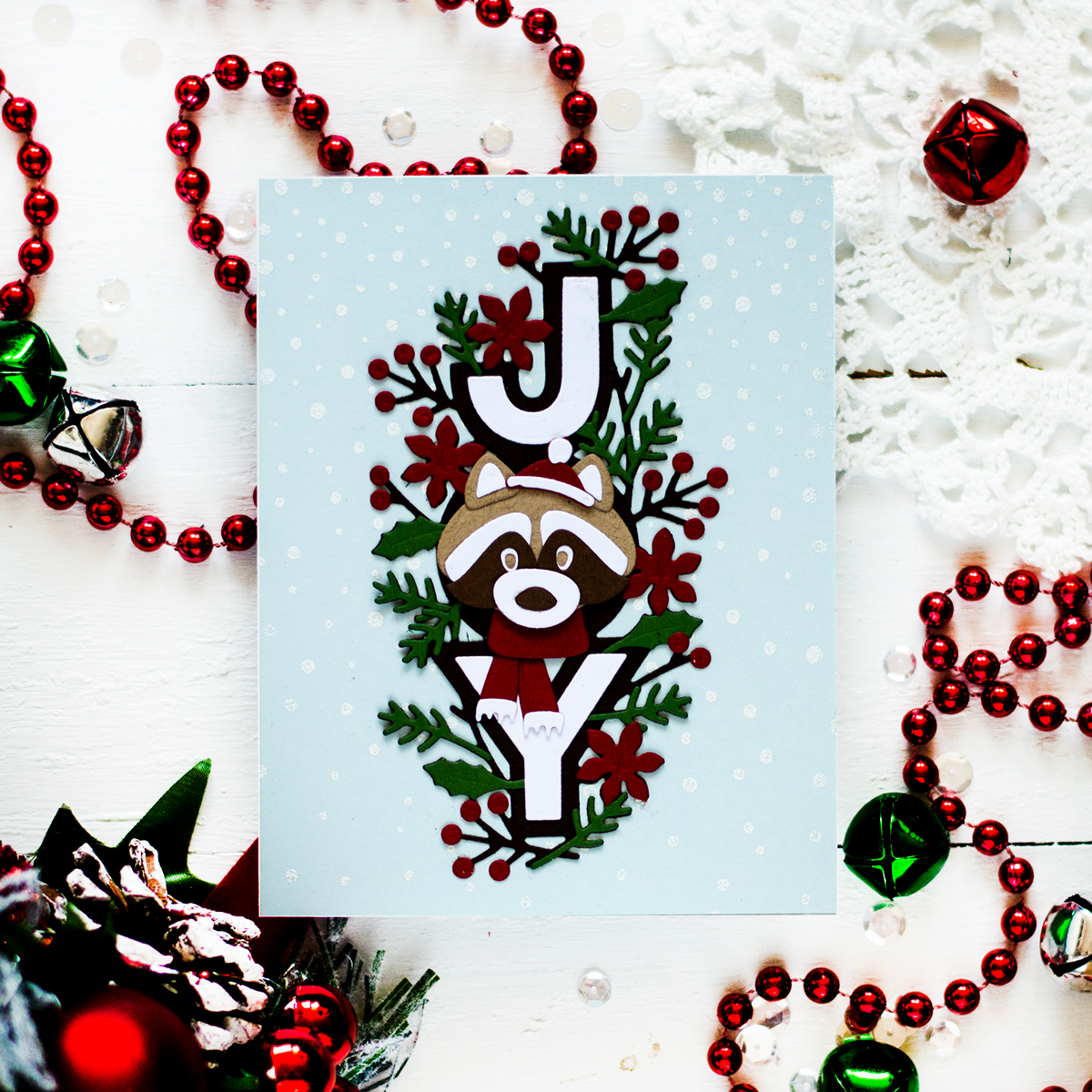 This card took a million die-cuts to make, but it was totally worth it. Look at this cute raccoon!!!

First I die-cut the base JOY die out of a brown cardstock. Then I die-cut small details out of green (pine branches and holly leaves), red (poinsettias and berries) and white for letters. I adhered all elements onto the brown die-cut. 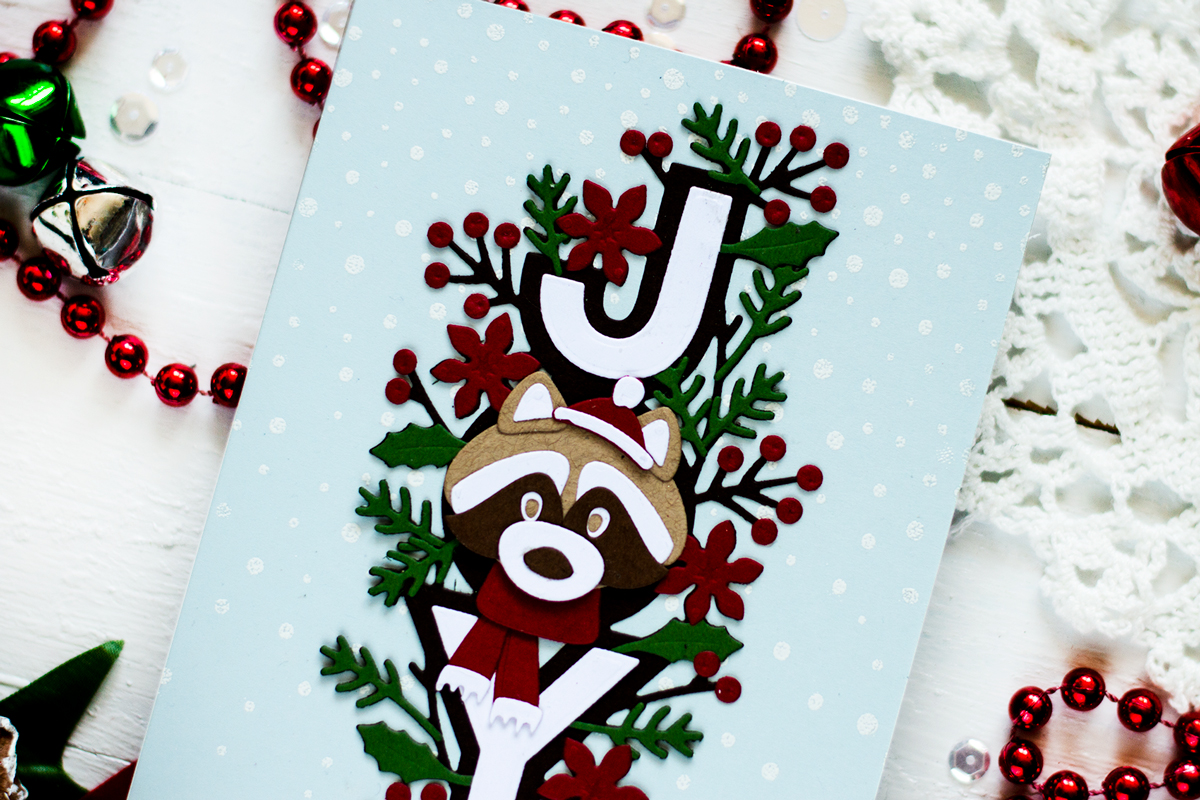 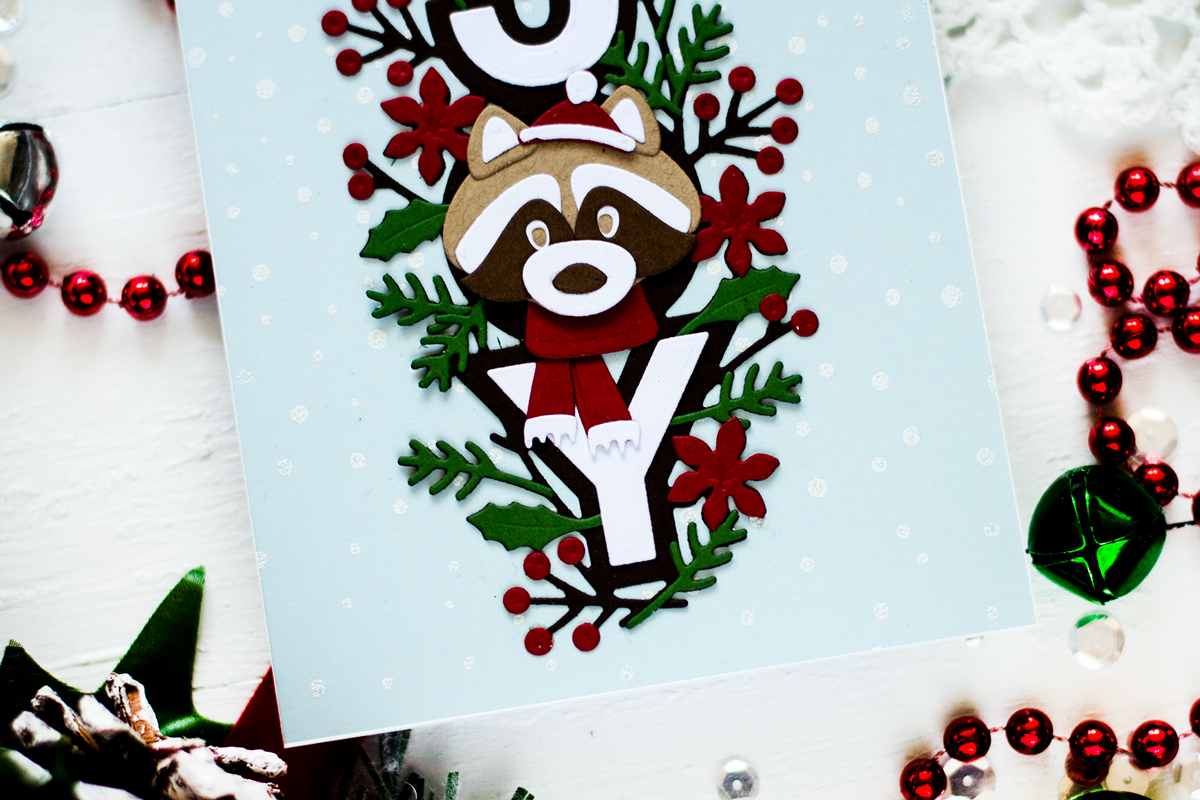 I assembled the raccoon head and popped it onto the JOY die-cut in place of the letter O.

After that I made a card base out of a light blue cardstock and white embossed a snowfall background onto it. 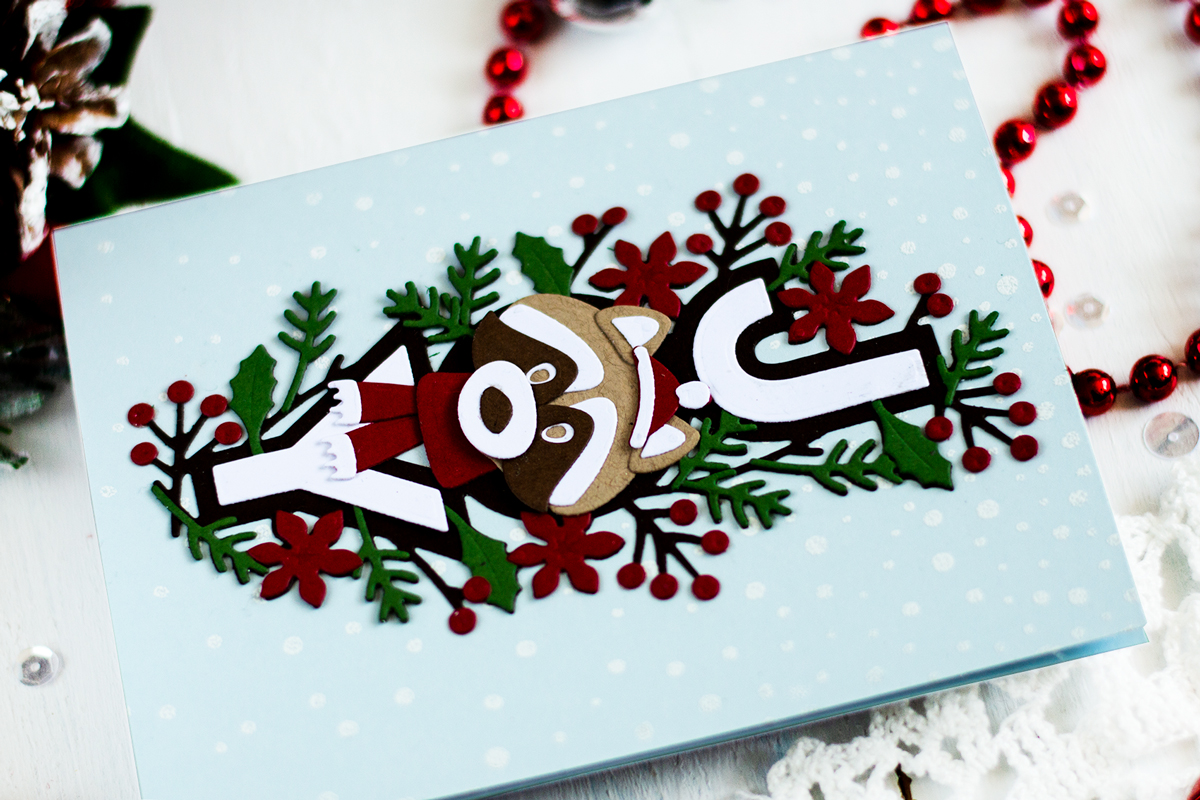 Lastly I adhered the JOY die-cut onto the card.

For my next card I used the Merry Hugs Die Set. 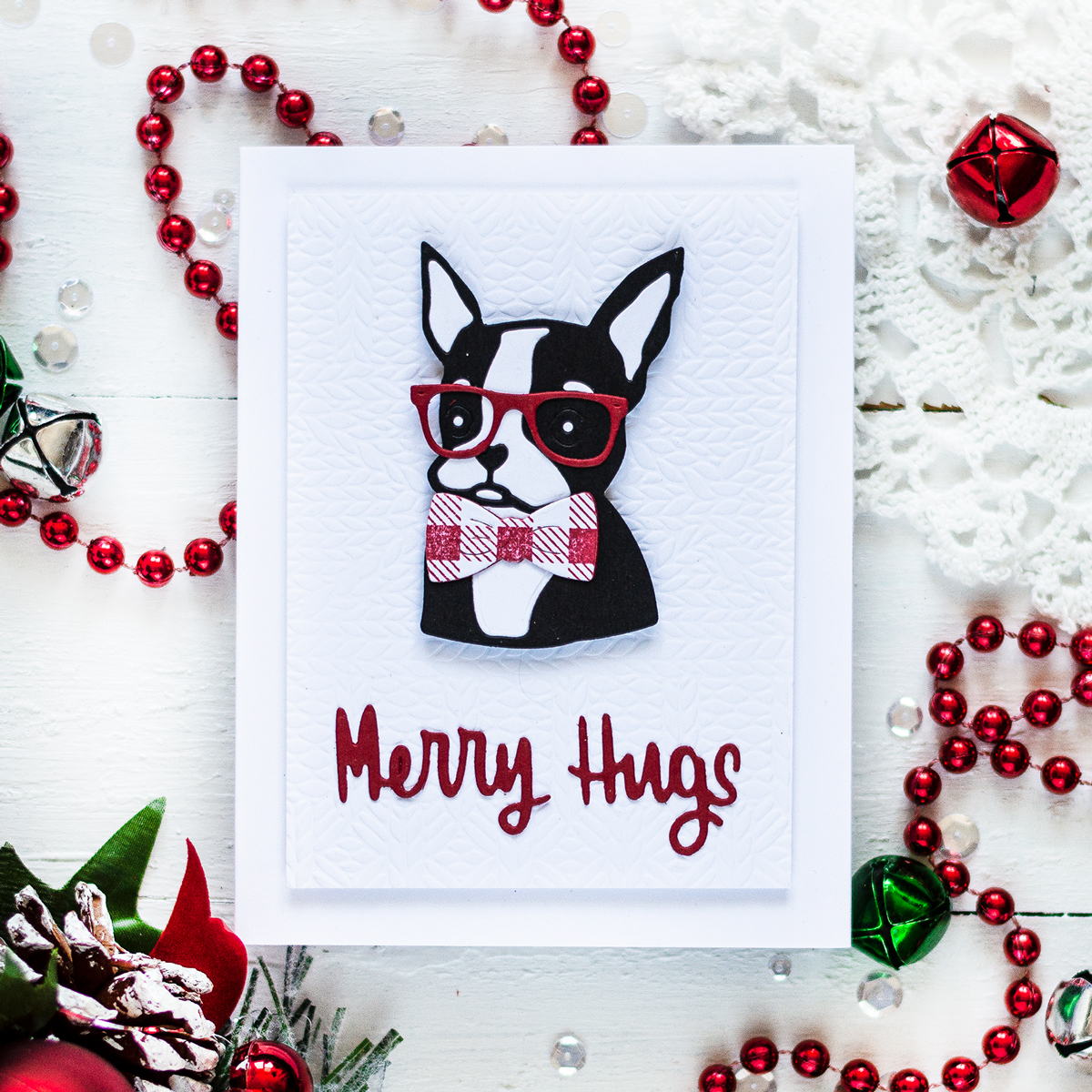 I started by embossing a white panel with the Cozy Knit Embossing Folder. After that I foam mounted it onto a white card base. 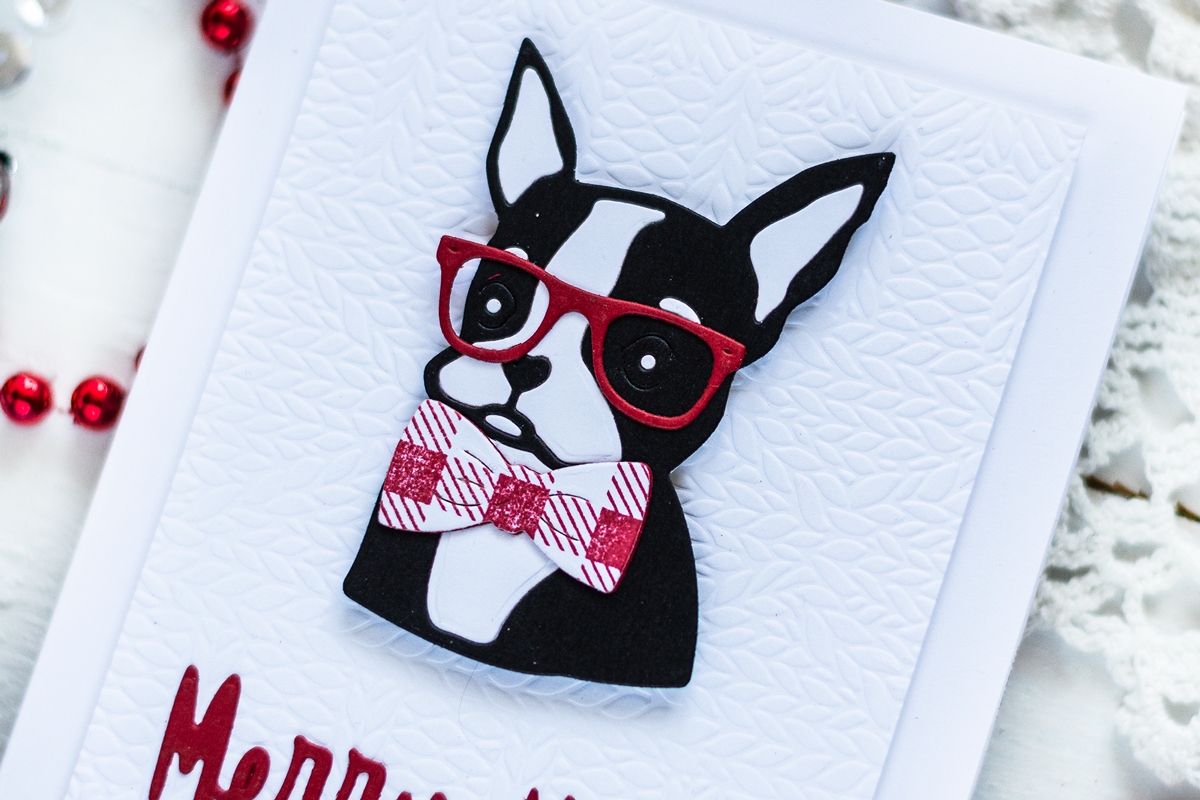 I die-cut the dog from the set out of white and black cardstock and assembled the bland and white dog by adhering its parts onto a piece of scrap cardstock smaller than the dog die.
After that I popped the dog onto the card. 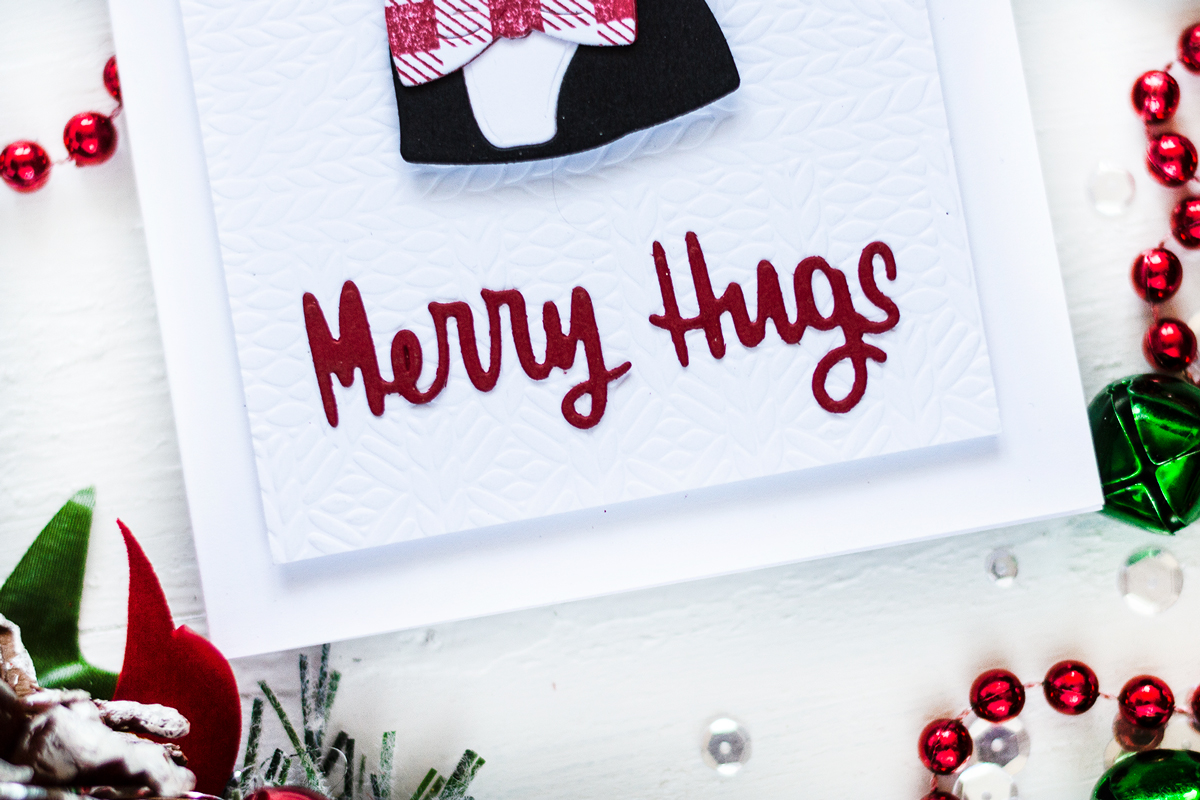 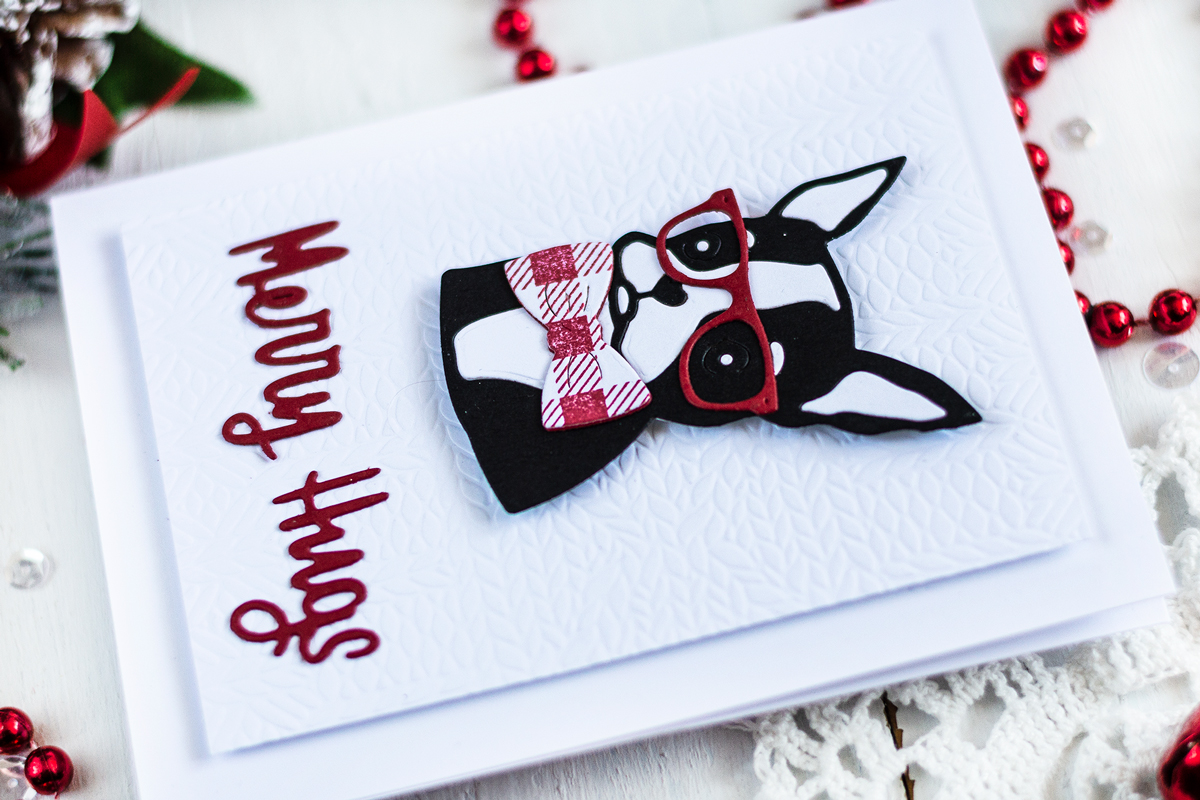 Lastly I die-cut the sentiment out of a red cardstock and adhered it below the dog.

For my last card I used the Santa’s Workshop Die Set to make a snowball card featuring a cozy winter scene. 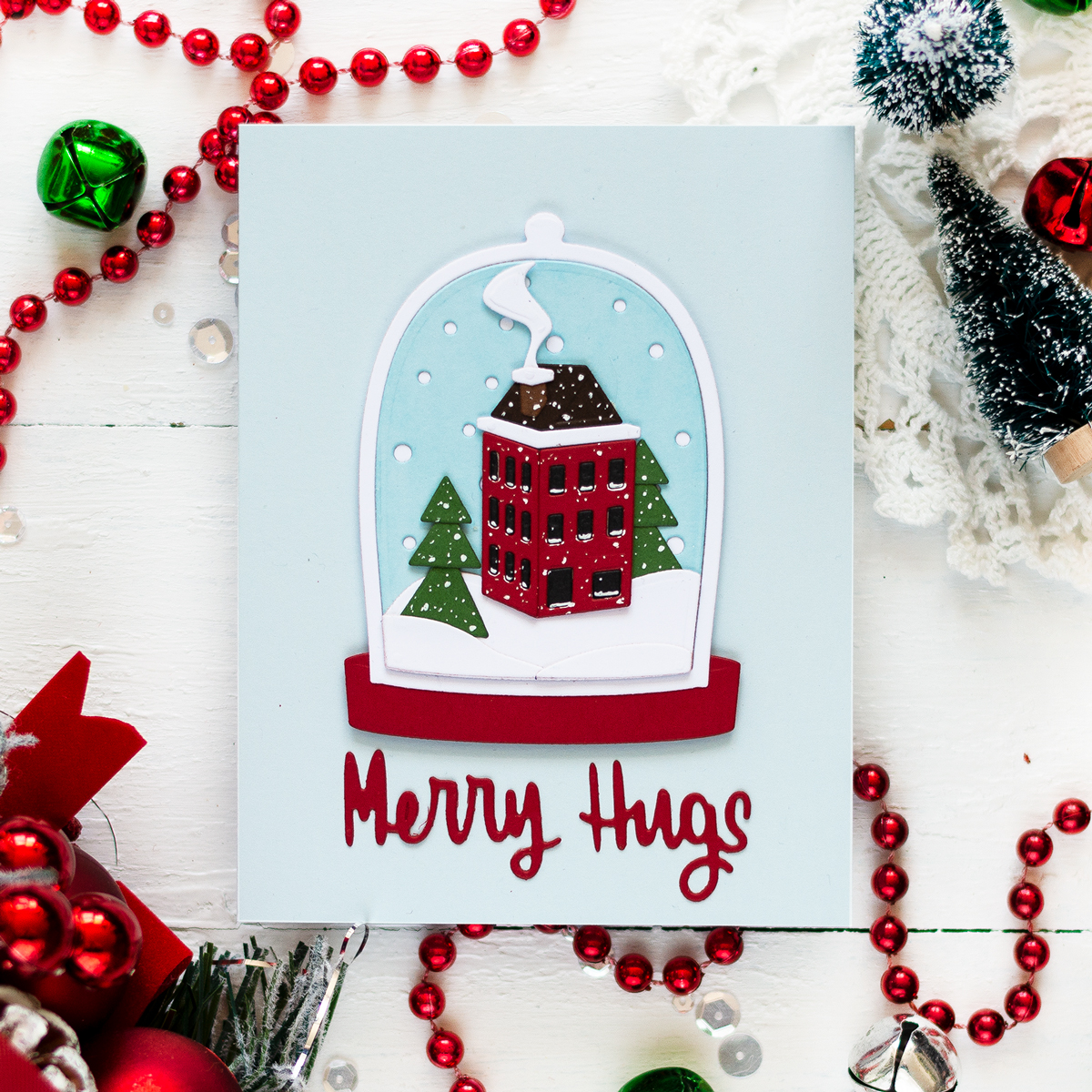 First I made a card base out of a light blue cardstock. Then I die-cut the snowball’s inside part of of the same cardstock.

After that I blended light blue ink onto this piece to make it a bit different from the card base. 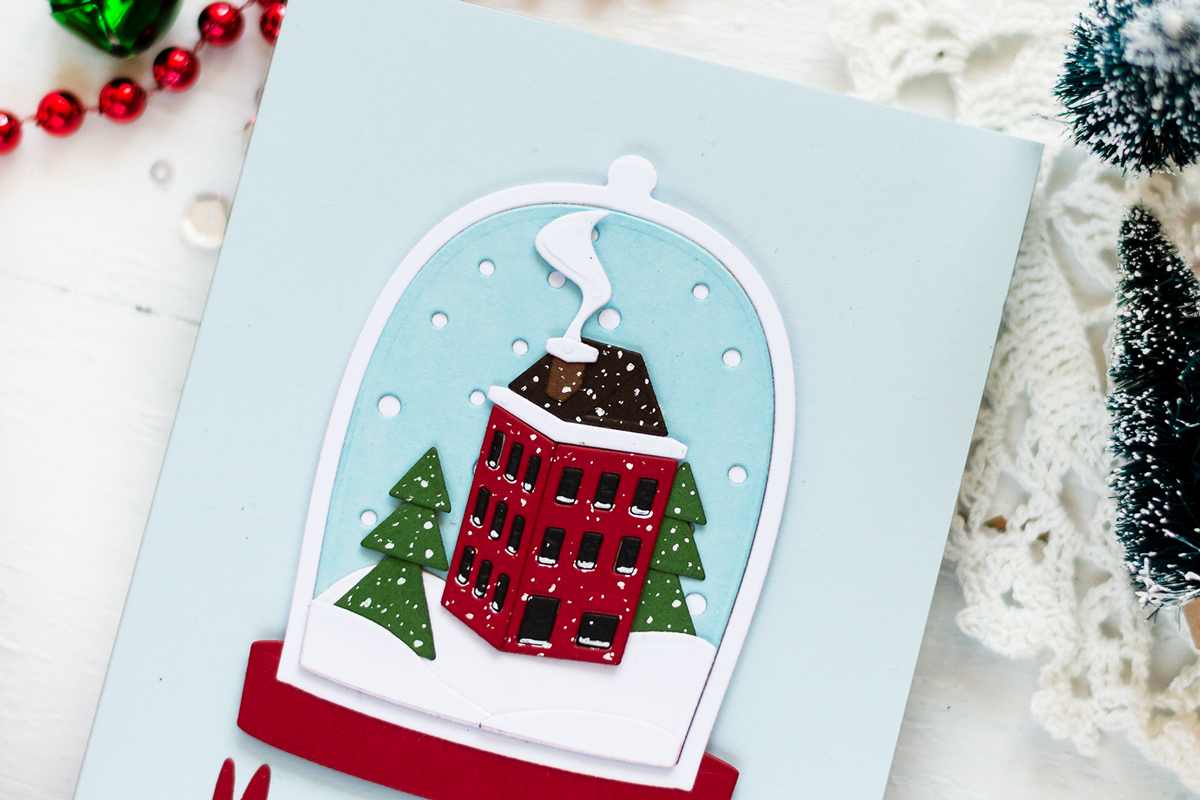 I die-cut the elements for my scene out of white, red, green, brown and black cardstock and assembled a winter scene inside of the snowball. 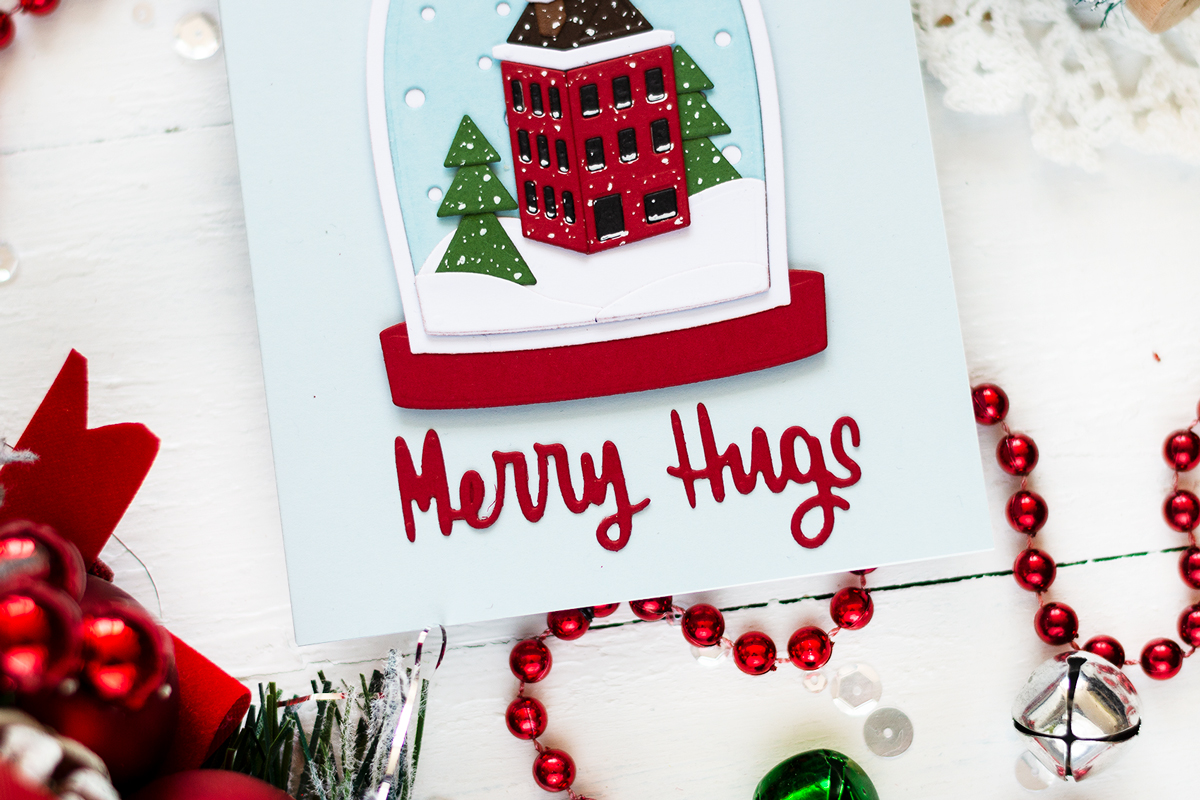 Which I foam mounted onto the light blue card base.

I die-cut the sentiment out of a red cardstock using dies from the Merry Hugs Die Set and adhered them below the snowball. 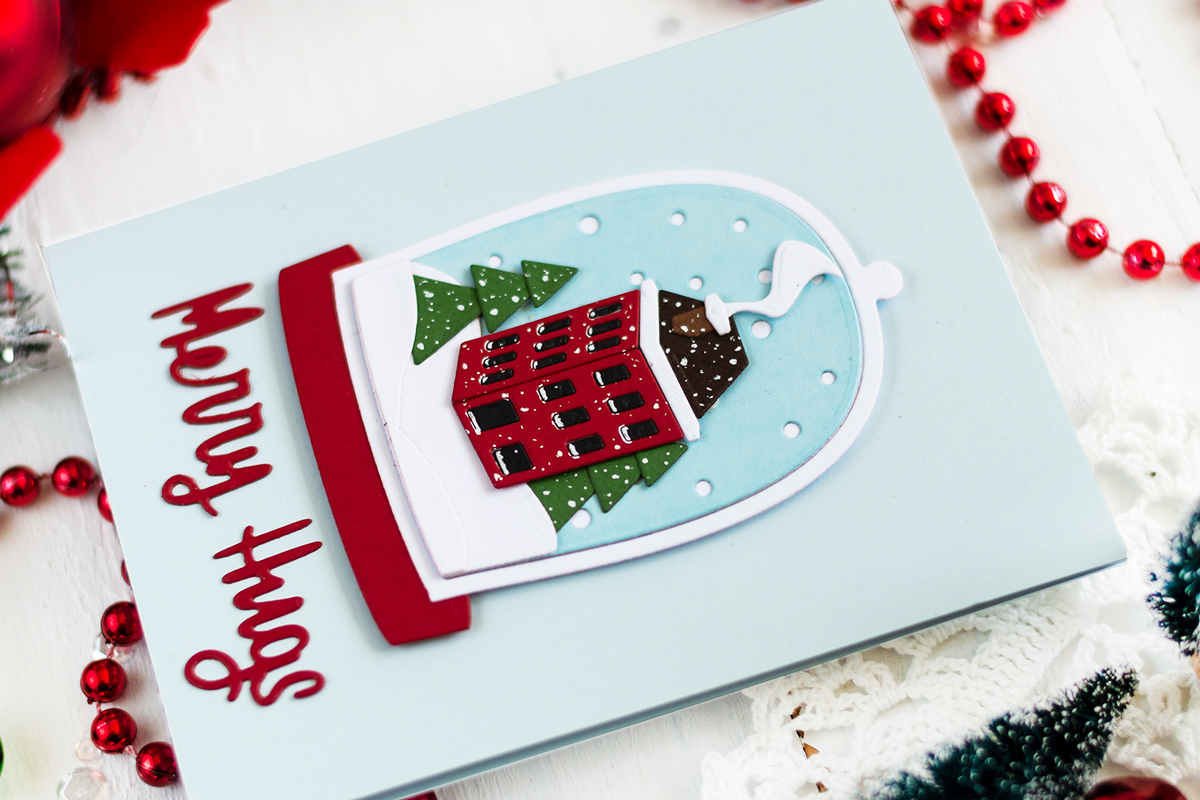 Which finished off my card.

I hope you liked the ideas of holiday cards I shared today. I had so much playing with die-sets from the Holiday 2019 collection. There is so much potential in them. Also I want to note that such cards is a good chance to use all those colored cardstock leftovers we save”for later”. I have a lot that I’ve been storing for years. And working with such die sets I use up quite a lot of them.