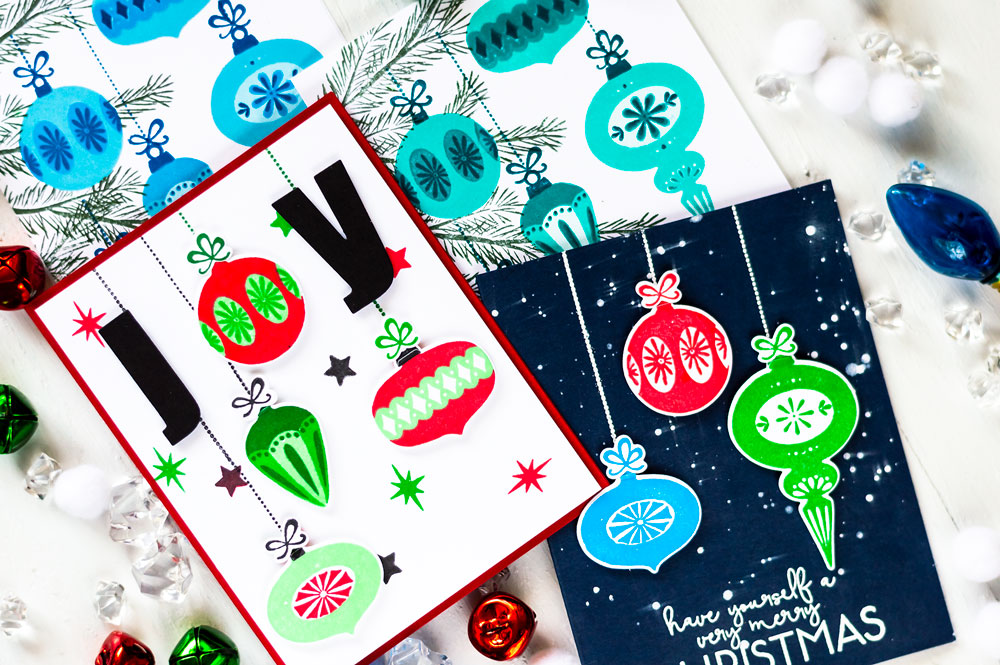 Today I will be with a stamp focus post for the recently released Brilliant Baubles Stamp Set. If you like Christmas ornaments you will love this set. It has many stamp images to help you create 6 different ornaments. And they can be mixed and matched so you may make different designs for each shape. 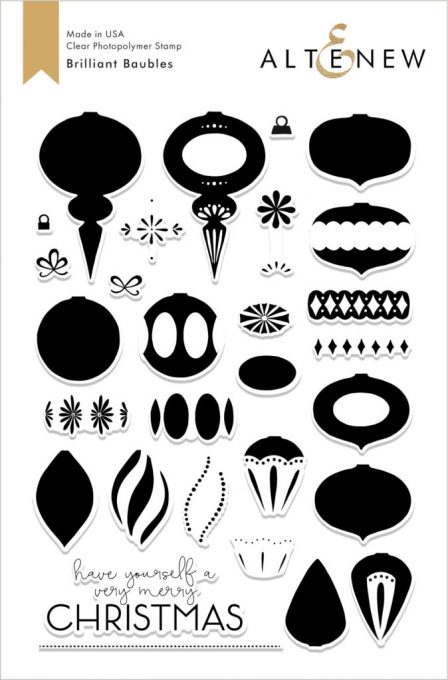 I will be sharing 4 cards with you today made using this amazing set.

My first card showcases several of my favorites – bold background (and it’s blue! which adds another bonus), monochromatic ornaments, and splatters. 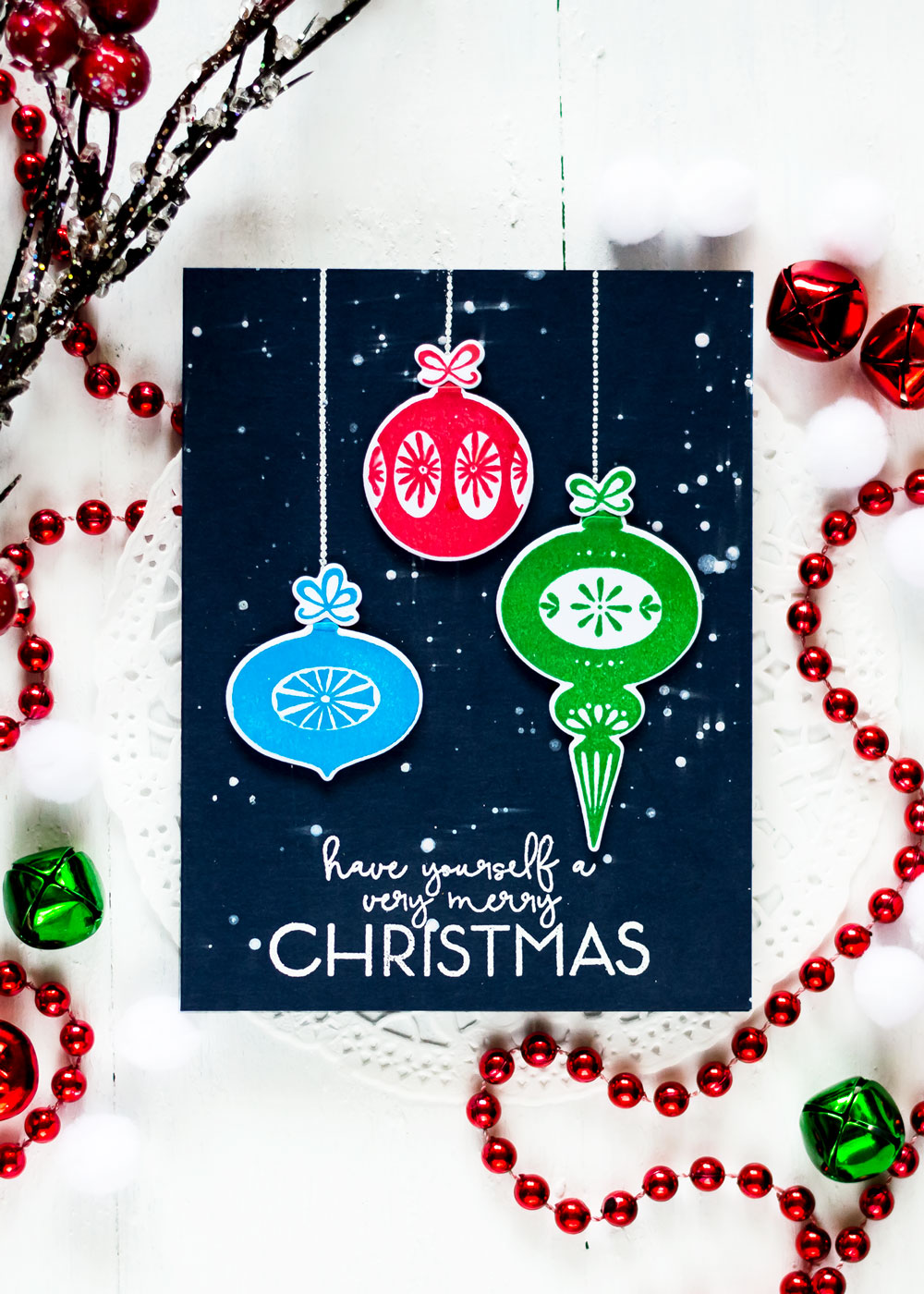 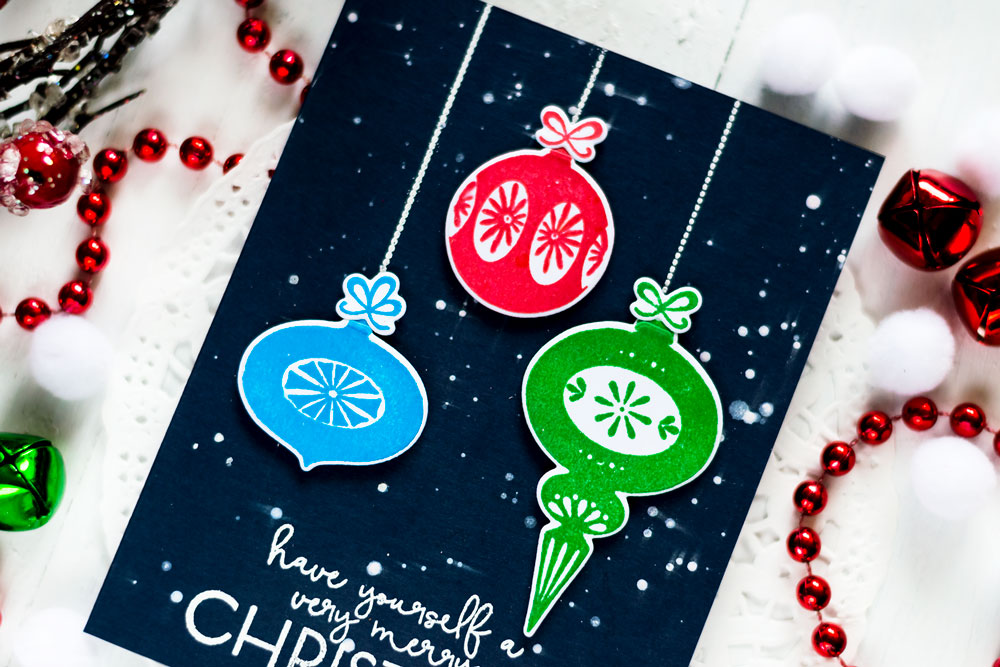 Speaking of which. I made a card base out of dark blue cardstock and white embossed a sentiment from the set onto it.

After that, I added some Pure White Ink Spray splatters onto it. After that I white embossed three strings to “hang” the ornaments onto. 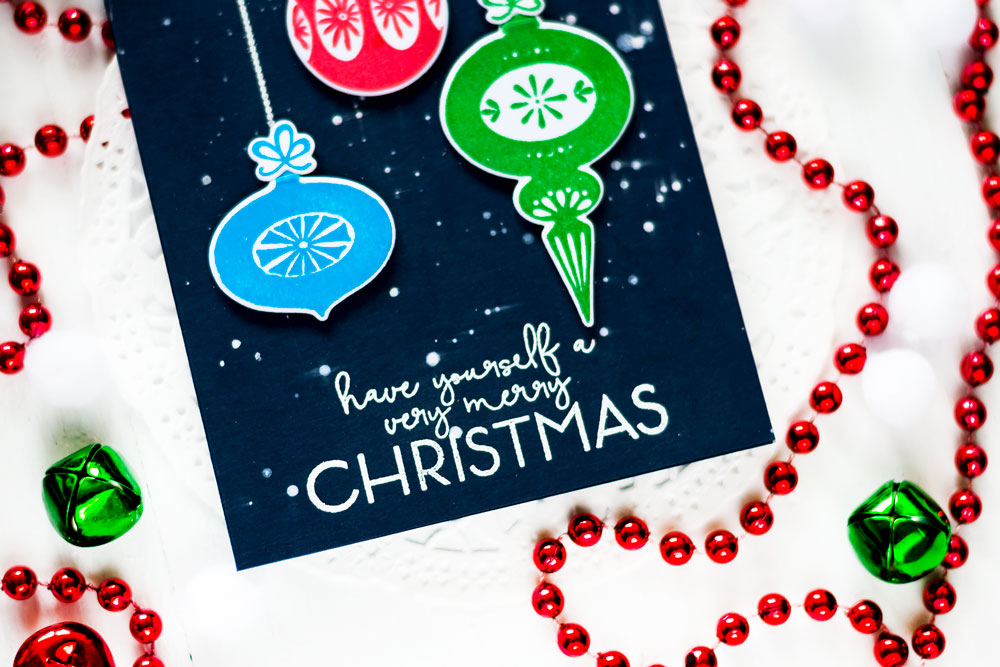 In this case, when I was “erasing” the baby powder I was smudging my white ink spray splatters. At first, I freaked out. They already dried out at that point yet they were getting smudged by an eraser. Apparently, even dried out splatters (which are sitting on top as all pigments are) can still be smudged when hardcore “rubbing” with an eraser is done.

The good thing was that I was able to easily fix that smudging by (surprise, surprise) erasing the smudged areas with the eraser (the same guy that smudged them at the first place). But then I had a second look at those smudged areas and they reminded me of those “starbursts” (for lack of a better word) that we see around lights in the darkness. So I started rubbing in the perpendicular direction too and ended up with that interesting “starburst effect”. 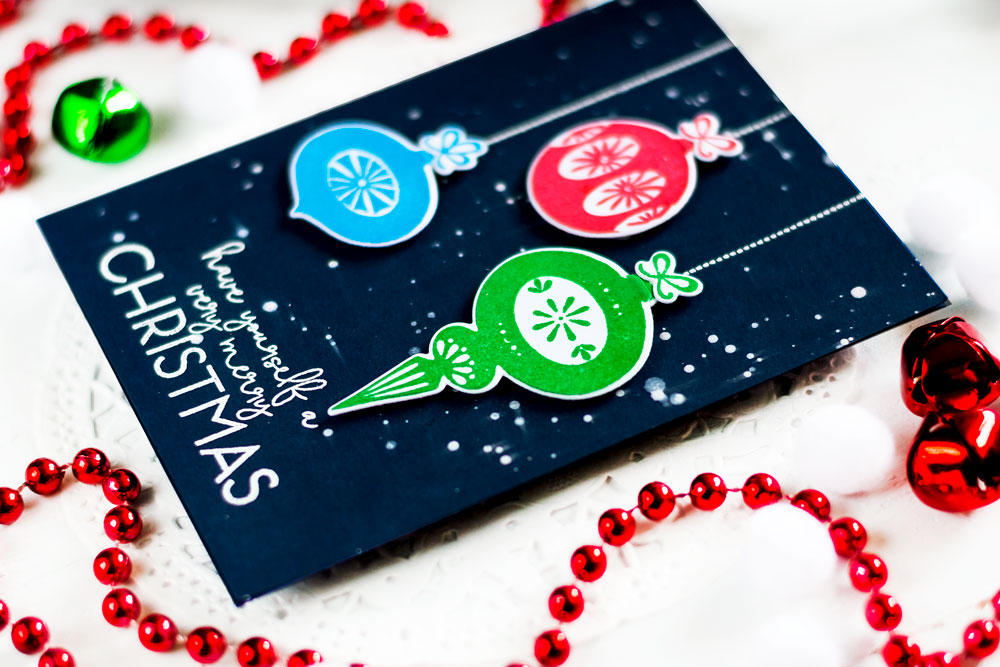 Lastly, I die-cut the ornaments using the matching dies and foam mounted them onto the card base.

My next card is clean, bright and colorful. Made in more traditional Christmas colors.

I feel like in any theme if there is a round object, along with a word with the letter O inside – you should seriously consider replacing the O with the round object.

Just like I did in case of this card. 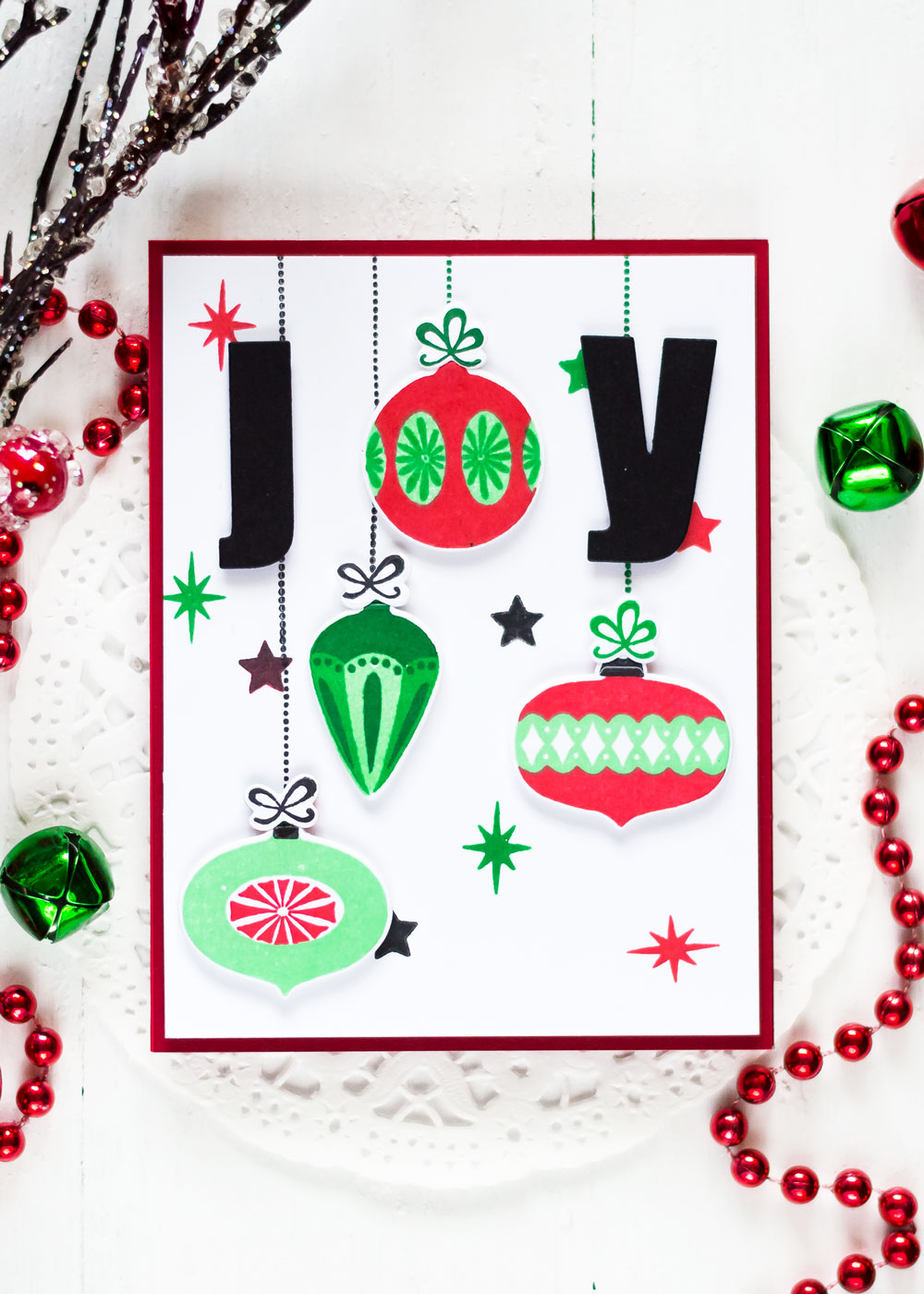 I stamped several ornaments onto a Solar White Cardstock using Crimson, Hunter Green, Just Green, Sweet Leaf, Minty Mint Crisp Dye Inks and die-cut them with the coordinating dies. I also stamped and die-cut the ornament caps and bows and adhered them to the ornaments. 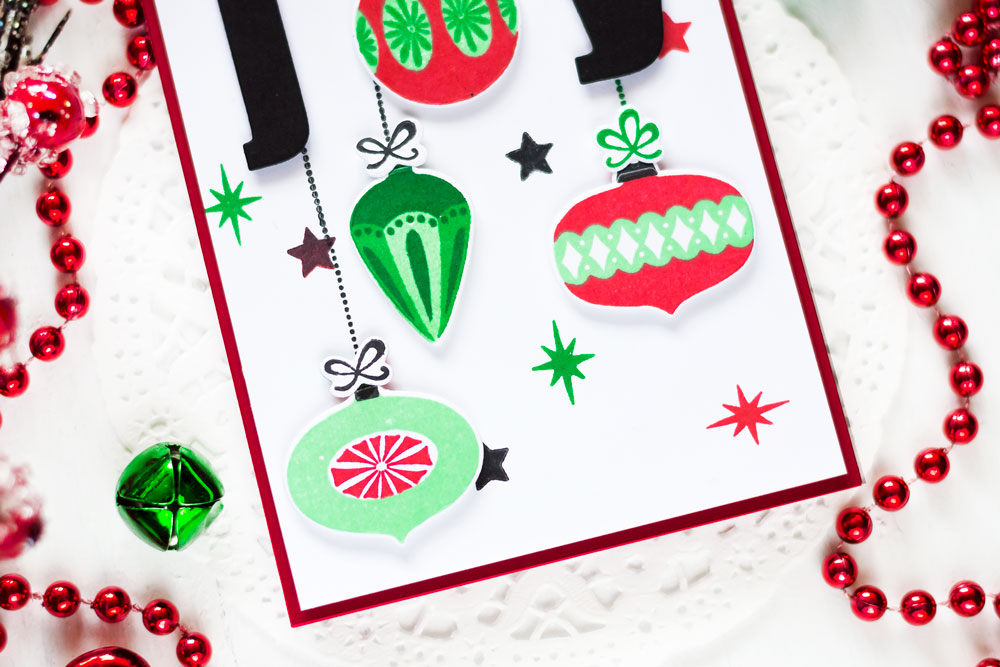 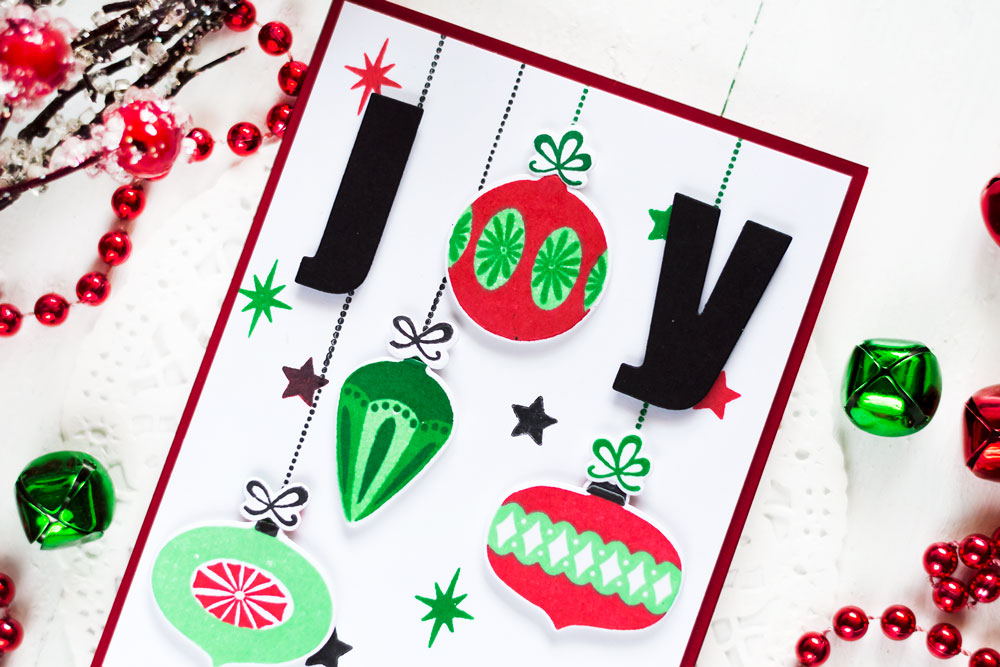 After that, I die-cut two letters for the sentiment out of a Jet Black Cardstock and popped it onto the panel along with one round ornament in place of O. 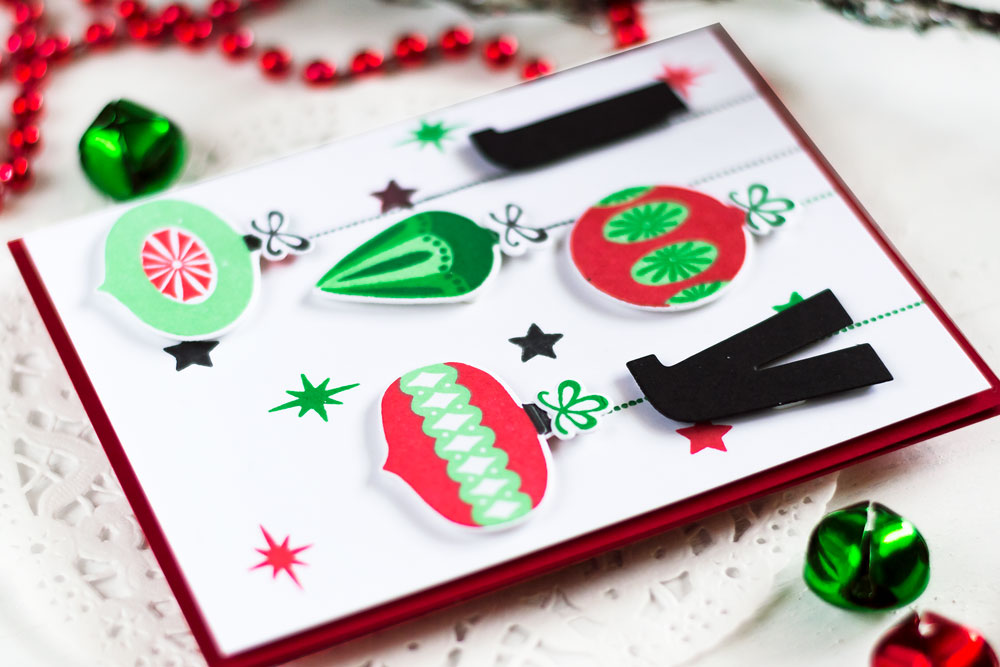 Then, I “hung” the rest of the ornaments onto their strings. 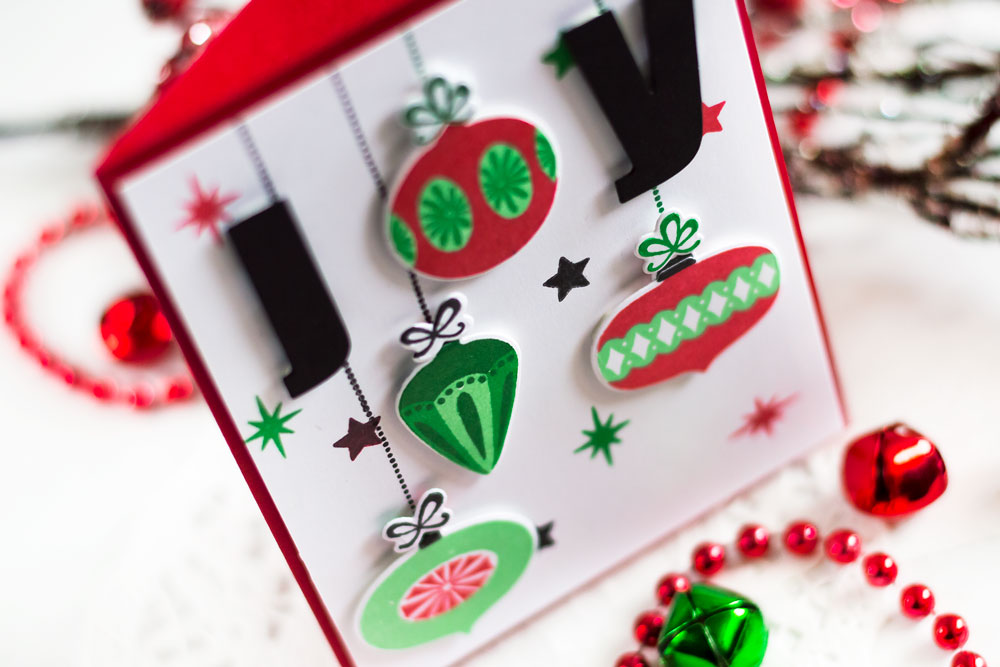 This card was planned to be a one-layer one. But I decided to turn it into a two-layer one. First – I felt like adding a border around this relatively clean design. And also I failed to adhere the sentiment perfectly centered. Most likely no one would ever notice it. But I wouldn’t be able to sleep at night knowing this (#ocdproblems).

The next two cards were made at the same time. I was reproducing the same design stamped in different color schemes, using a stamp positioning tool of course. I also did minor masking here, it really was minor. Didn’t add much to the card creation process. 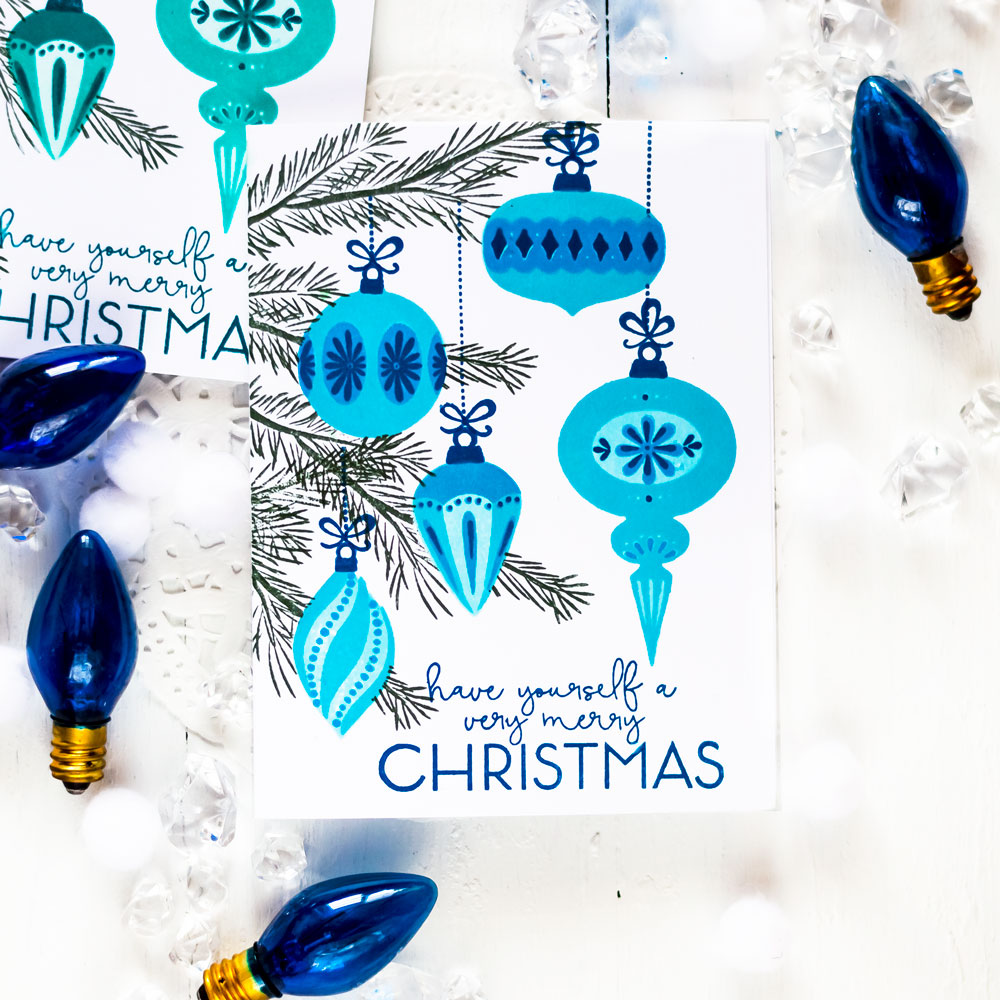 Both cards are one-layer one; there is nothing else to them but white card bases and stamping. 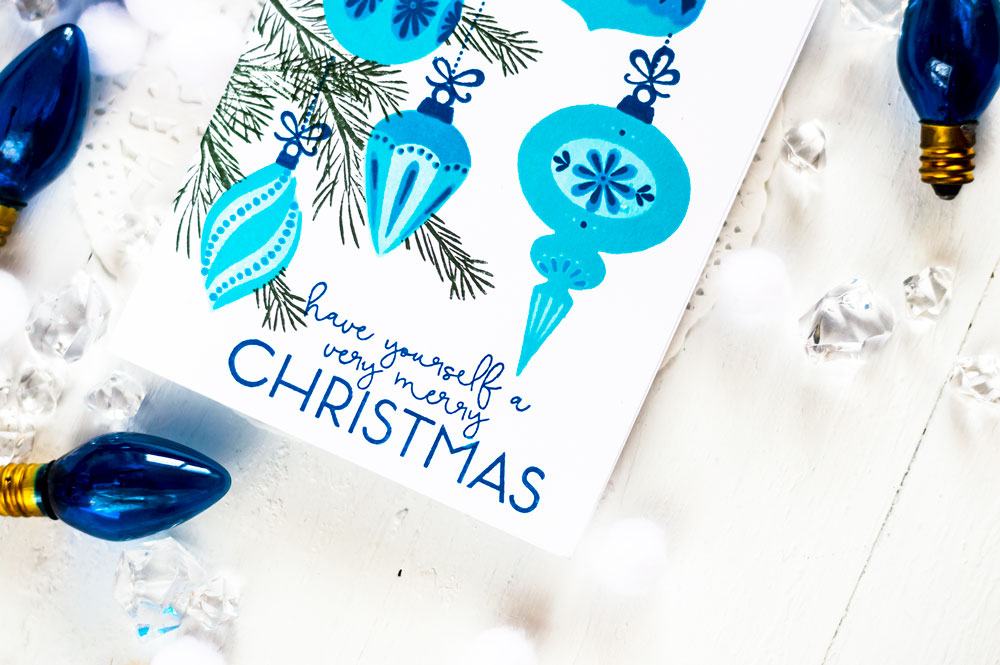 First, I stamped a sentiment in the bottom right parts of each card using the Galactic Stream Crisp Dye Ink and Starlight Crisp Dye Ink for the blue and teal card correspondingly. I had to do it at the beginning to kind of “hold the space” for the sentiment.

The ornaments of the first card were stamped using dye inks from the Deep Blue Seas Set. I planned the design in such a way so the ornaments “bodies” (is that a term?) don’t overlap. So, on this point, I didn’t need to do any masking. I was just stamping layers. Switching a card and ink color for each layer element. 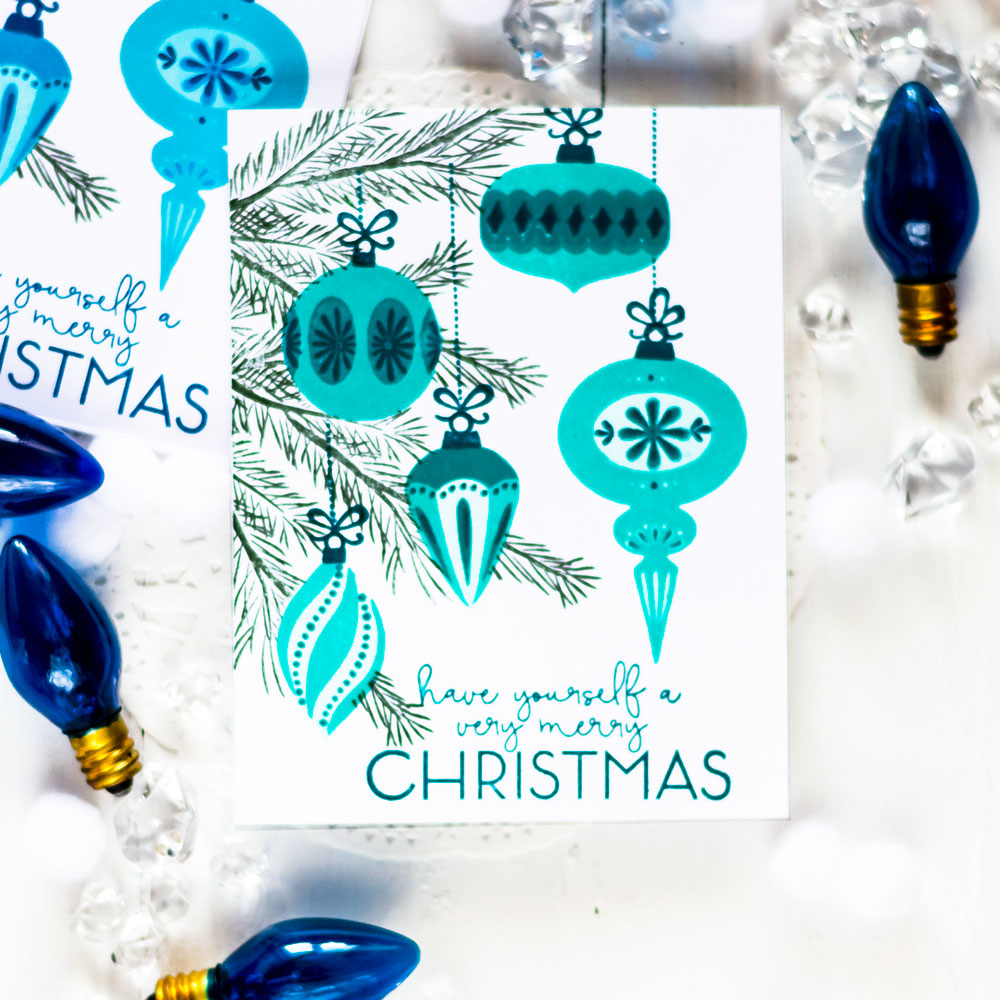 For the second card, I used dye inks from the Sweet Dreams Set. 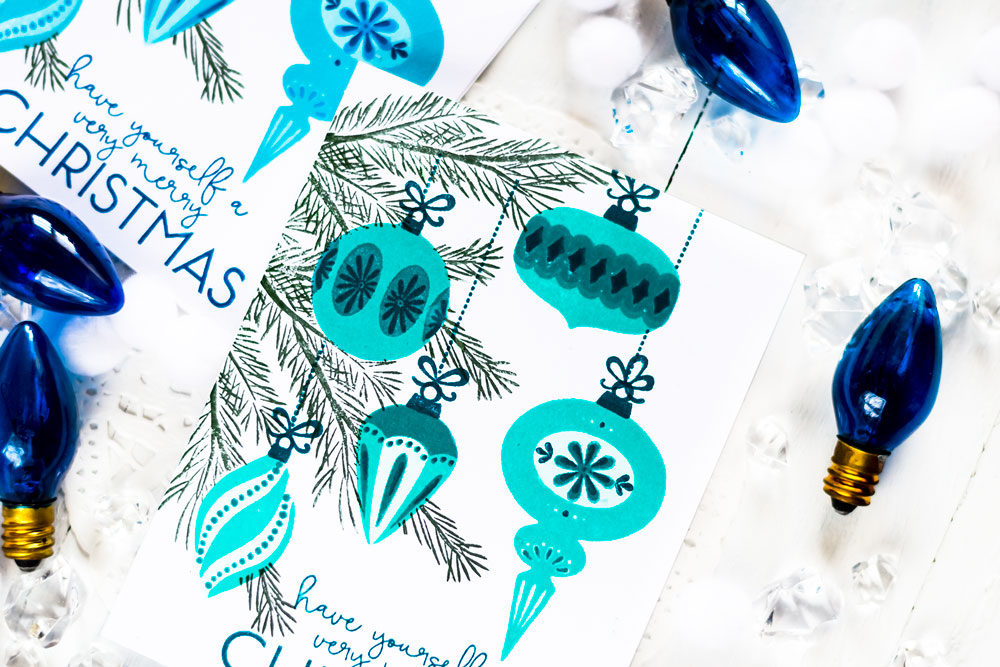 After I finished with the ornaments’ “bodies”, I quickly cut out masks for them out of a masking paper. For each card, I was placing a corresponding mask onto an ornament and stamped pine branches. Using a stamp from the Peace on Earth Stamp Set and Evergreen Crisp Dye Ink. 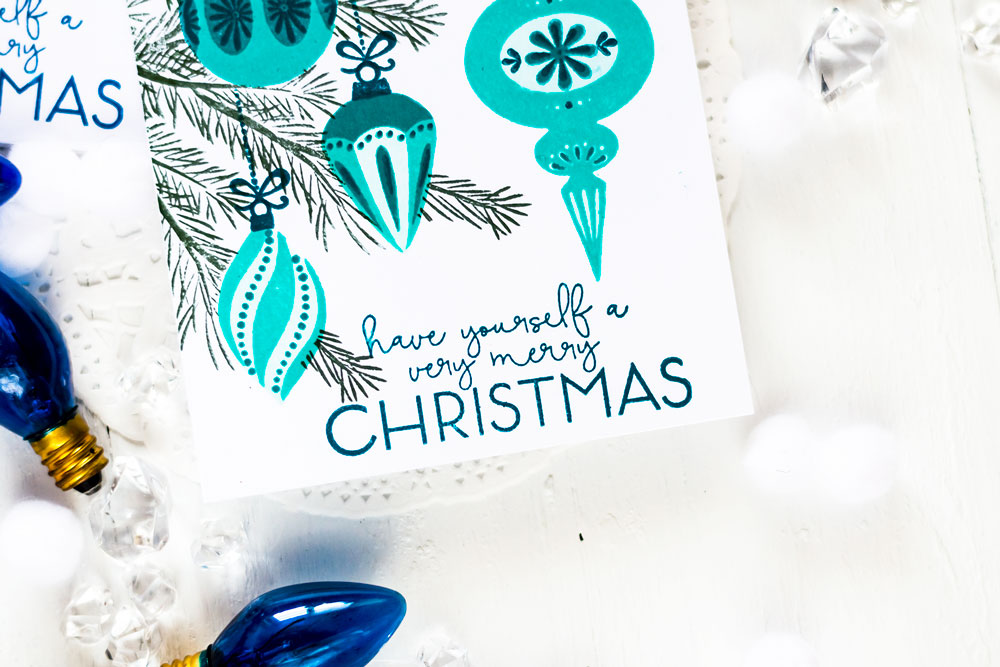 After I finished with the pine branches, I stamped the strings from a branch to an ornament. This time to mask off an area above a branch (from stamping a string) I was masking off using a tape. 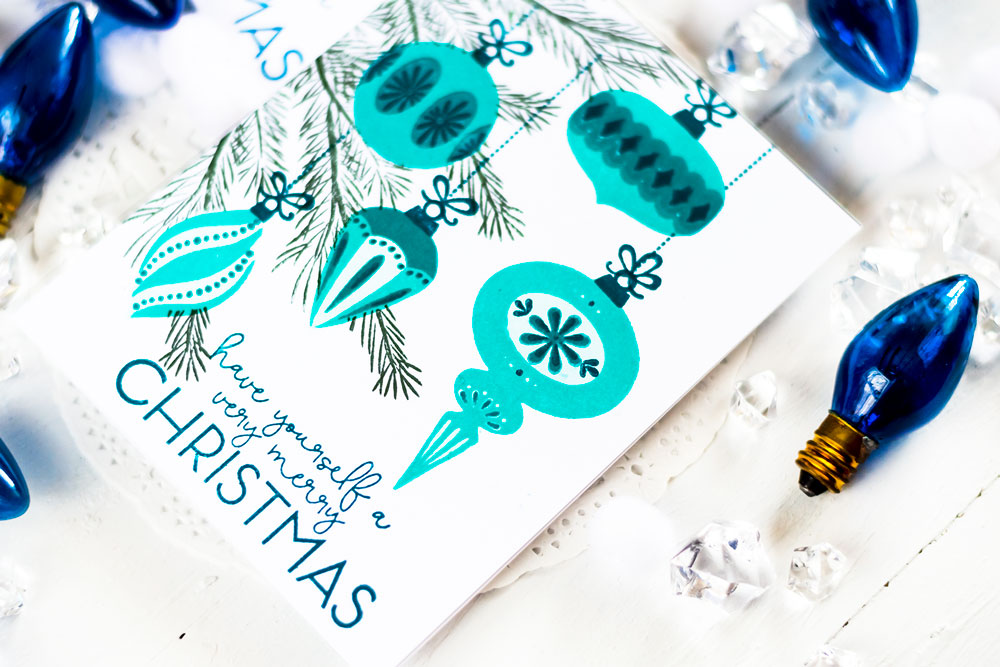 This set is very beautiful. I have so much fun playing with it. Hope you like it too!

If you’re interested in the supplies I’ve used – they’re listed below. Where available I use compensated affiliate links (which means if you make a purchase I will get a small commission with no additional cost for you). Click on the letters below to go to a favorite store: Simon Says Stamp (SSS), Studio Katia (SK), Altenew (AN), Ellen Hutson (EH), Scrapbook.com (SC), Amazon (AZ), Spellbinders (SB), etc.
I truly appreciate your support!