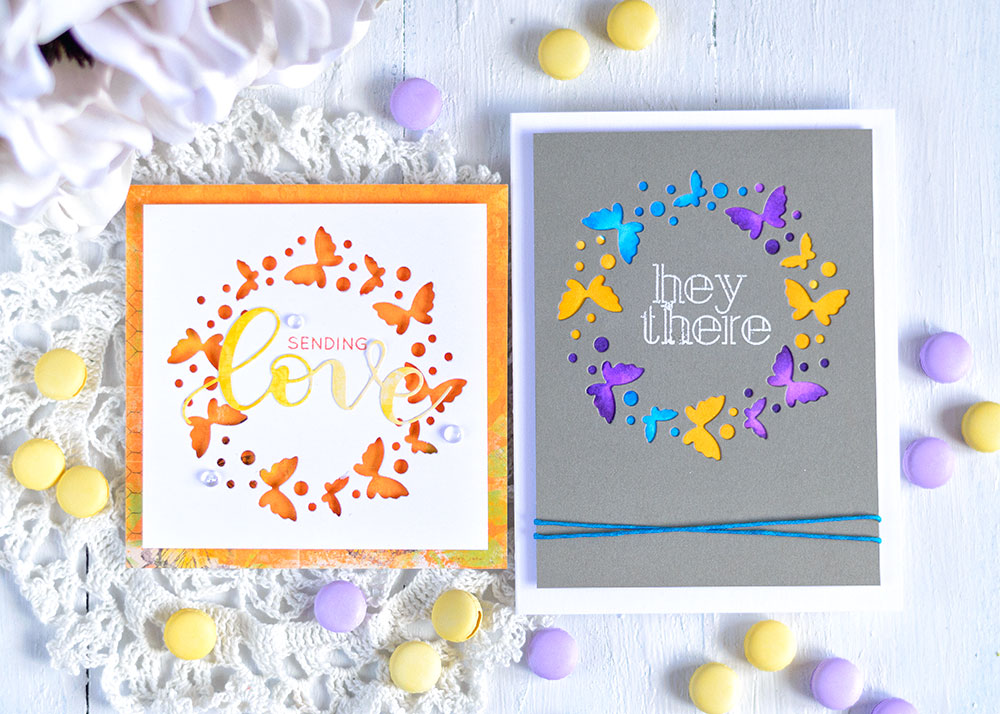 Have Spring arrived to you yet? I see many people still sharing snow in their feeds 🙂 I would love to have snow as well. I’m always for snow, any day of a year lol. We just have a cool weather (a bit colder than you would expect in April).

Nevertheless, if you enjoy the weather it waiting impatiently for real Spring – I believe you will enjoy seeing new release from Simon Says Stamp – Fluttering By.
I was lucky to play with a fun die from the new release Flickering Butterfly Circle and want to share two cards made using it. They both are very simple and we’re fun to make.

For my first card I created a colorful butterfly wreath. 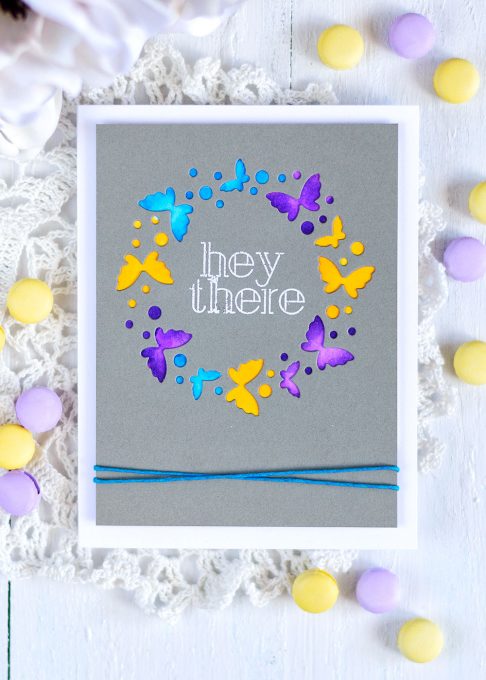 I die cut this shape out of a white cardstock, placed it onto a white panel and lightly traced all elements with a pencil. Next I colored all elements using yellow, blue and violet COPICs. And by “colored” I mean “scribbled color down”. Only with butterflies I tried to create some kind of shading, very basic though. 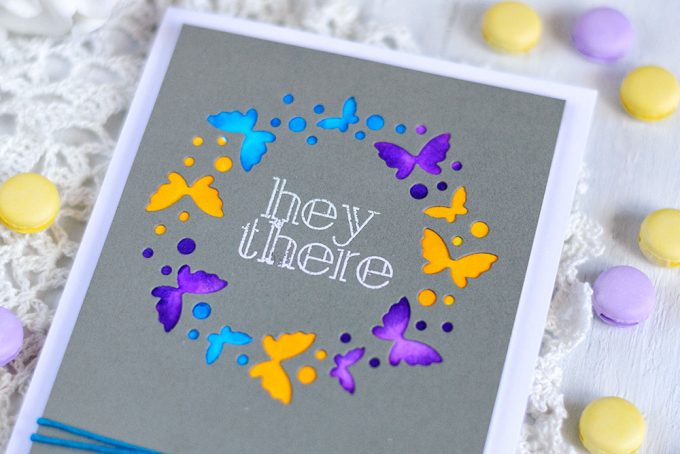 Also I should note that I used a quite thin (80lb) cardstock to color on. I’ll explain a bit later why I did this.

Initially I planned to use the white die-cut to place above the colored panel, but decided to try a gray one before committing to white. And as you can see I ended up committing to gray lol. 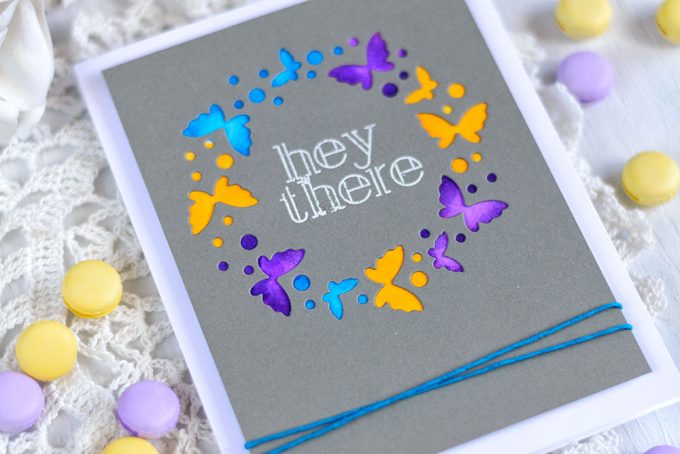 I adhered the gray panel on top of the white, colored one. Followed by white embossing a sentiment from SSS Big Greetings Stamp Set in the middle of the wreath.

Next I tied a blue hemp twine around the panel and foam mounted it onto a white card base. 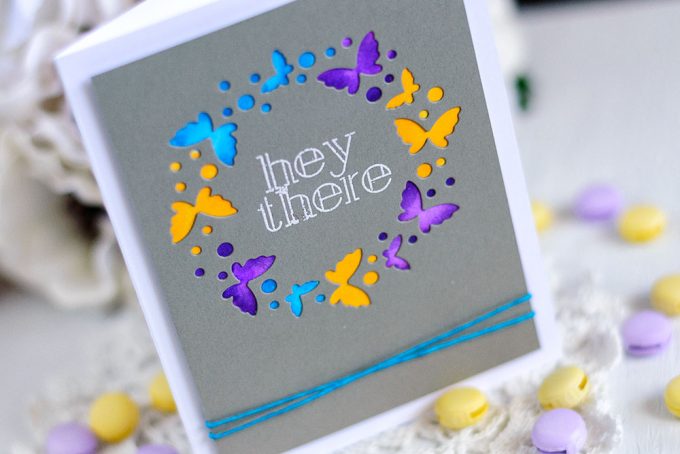 I mentioned above that used 80lb cardstock for COPIC colored part and here is why. As I knew that would adhere this panel under the front one which would be foam mounted after that. And I didn’t want to add bulk with a thicker cardstock. Another reason is that thinner cardstock is cheaper. I’m a big fan of thick cardstock, but whenever I can save and use 80lb one – I do it 😉

USE THOSE PATTERN PAPERS

But I still had a white panel with die cut Flickering Butterfly Circle. Who would discard such a wonderful die-cut? So I quickly made another card. 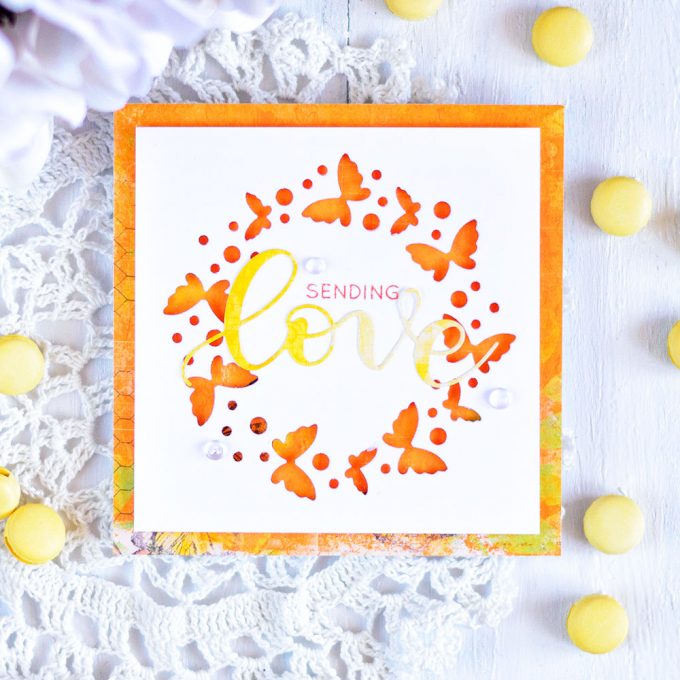 For which I used some pattern paper (o_O). I posses tons of pattern paper and use it very rare. And every time I use it – it’s a shock for me lol. Although looking at this card I should make a mental note to remember such paper as one of the resources for a card. Besides satisfaction of using up one of those such paper usually make the time needed to create a card much shorter. 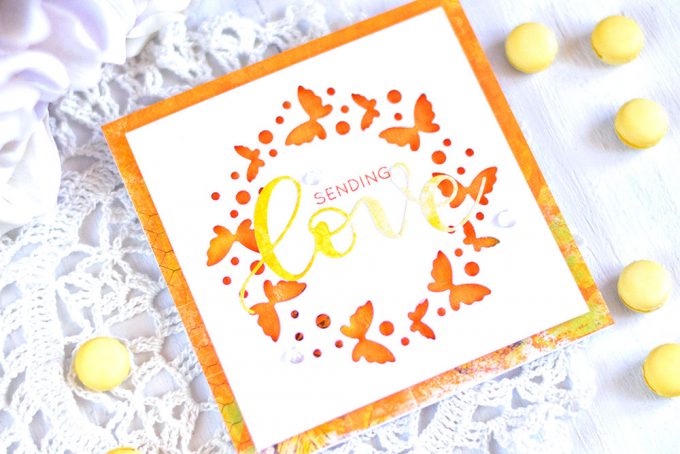 I decided to go with a square card. I almost don’t make such format, but recently I was inspired by cards from Cathy Zielske, who is a genius of CAS style and evidently likes making square cards. Which also look very cute 😉 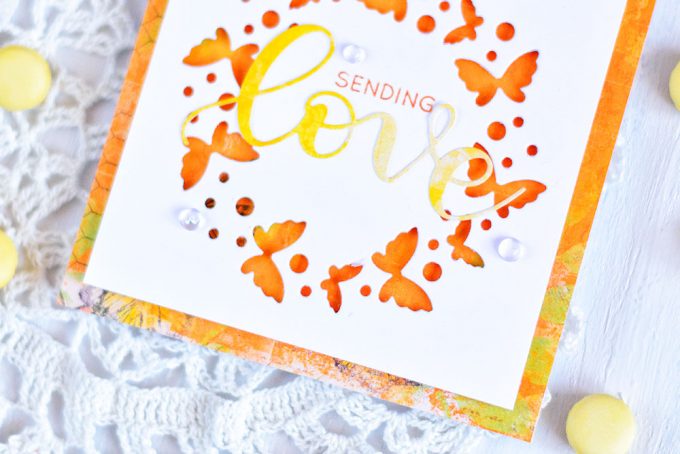 I used a patterned paper to adhere onto a card base, foam mounted the white panel on the top. And I used a pattern paper to die-cut a word love for the sentiment, using a die from SSS Love Die Set. 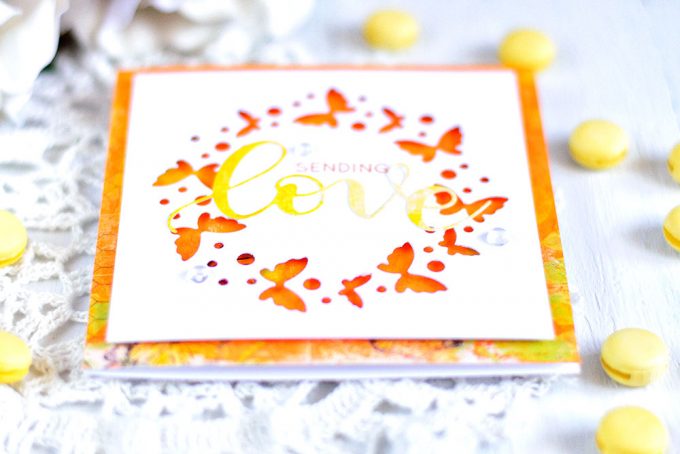 If you’re interested in the supplies I’ve used – they’re listed below. Where available I use compensated affiliate links (which means if you make a purchase I will get a small commission with no additional cost for you). Click on the letters below to go to a favorite store: Simon Says Stamp (SSS), Studio Katia (SK), Altenew (AN), Amazon (AZ), Spellbinders (SB), etc.
I truly appreciate your support!